Europe's most charismatic politician leaves only for a while 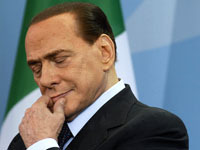 Italy let Silvio Berlusconi go. Hundreds, if not thousands of people took to the streets of Rome welcoming the resignation of the long-term head of the government. Perhaps the most charismatic politician in Europe has left his successor, Mario Monti, quite a difficult legacy.

Despite the fact that on November 8 Don Silvio has survived another test in the Parliament in the form of a trust vote, his resignation was a done deal. The level of credibility among the Italians sank to an all-time low of 24 percent. The once-loyal to Berlusconi deputies were leaving the ruling coalition one after another. Italy's public debt has reached an astronomical figure of two trillion Euros.

The man who headed the government three times cannot but bear his share of responsibility for a very unpleasant situation the country found itself in. Being a man of right-wing views, he acted in a sure way - cutting down all possible costs. It did not help, but Berlusconi could not just leave. He listed the adoption of anti-crisis measures agreed with the EU the condition for his retirement. A relevant bill was immediately introduced in the parliament.

The prescribed measures are severe. They include simplification of the transfer of state assets and agricultural lands into private hands and raising the retirement age to 67 for both men and women. Other measures include the increase of the VAT, excise duties on petrol, as well as introduction of a special tax on the energy sector. In addition, the salary of civil servants should be frozen until 2014. These measures should lead to savings of 60 billion Euros.

The Prime Minister said that as soon as both Houses of the Parliament approve the plan, he would resign. Perhaps Berlusconi hoped that the deputies and senators will have a long discussion on each item. Yet, everything turned out differently. Both the Chamber of Deputies and the Senate have sacrificed their weekend to adopt the necessary document. As a result on a Saturday night of November 12 Berlusconi went to President Giorgio Napolitano and presented a petition for his resignation that was immediately granted.

Rome rejoiced. Hundreds, if not thousands of people took to the streets of Rome, celebrating the departure of Don Silvio. Counter-demonstration of his supporters were much less numerous and looked pathetic. Berlusconi, who throughout his brilliant career was very talkative, refrained from comments this time. Only some of the sources in his press service reported that he was extremely disappointed by what had happened.

A day later, President Napolitano named the Prime Minister's successor. This is a former European commissioner for competition, and now a senator, Mario Monti. An experienced politician and economist, he has already promised that Italy would cope with the current adversity. The EU welcomed the appointment of Monty and promised to closely monitor all actions of the Italian government.

We cannot say that Berlusconi was destroyed by the economic miscalculations. This man has been in sight for at least 30 years, of which nearly 20 - in big politics. Construction and media mogul, owner of the famous football club "Milan" in 1994 headed the Italian government for the first time. His second arrival to power 10 years ago became historic. Don Silvio was the first post-war Italian Prime Minister who has worked the entire five year term provided under the constitution.

It seems that there is no person in the world whose name would be associated with that many scandals. The number of trials in which Berlusconi was involved exceeds one thousand. They include corruption cases, financial mismanagement, and abuse of power. Knowing that he will be brought to court, the now former Prime Minister tried to pass a law on immunity for the top officials, but the trick did not work.

Berlusconi clearly stood out against the gray background of European bureaucrats. Some of his jokes provoked very mixed reactions. He once described the newly elected U.S. President Barack Obama as a "tanned guy." Recently, his telephone conversation where he gave a very rude assessment of some body parts of German Chancellor Angela Merkel was made public.

Everyone got tired of the tribulations of the politician's private life. Recently, the entire Italy followed the divorce of Berlusconi and Veronica Lario. Many questions were raised regarding emergence in the government of ladies with model appearance - for example, Minister for Equal Opportunities Mara Karfani or the Minister of Education Mariastella Gelmini. Some of the "favorites" of Don Silvio were famous with their candid photo-shoots.

His Bunga-Bunge parties were discussed in various parts of the planet. It is understandable as they were attended by a Moroccan nicknamed "Ruby" and Brazilian Iris Bernardi. The villas of Berlusconi were visited by girls from Russia, Lithuania, and the Dominican Republic. This list can be continued. Many Italians asked the question: when does Don Silvio find time to engage in the state affairs if his noisy parties follow one another?

How will the current Berlusconi's resignation affect the state of Italy? Will it repeat the fate of Greece? Ivan Rodionov, a Professor of Graduate School of Economics shared his comments in an interview with "Pravda.Ru":

"We cannot say that Italy (that has the third largest economy in the Eurozone) was brought to its current state by Berlusconi's mistakes. The fact that not everything was well in the country was obvious long time ago. Yet, the situation is not that terrible for the former Prime Minister. It is possible that an experienced politician, Don Silvio made his calculations and decided to temporarily jump off the ship. He can still come back, no matter what he said about the end of his career.

Of course, Italy has its own problems. Perhaps the most important of them is the imbalance in the development between the rich north and poor south. But it is better to invest in Sicily or Calabria than to wait until something similar to North Africa arises there. (Incidentally, refugees from the latter have recently become another problem for Italy). The European Union understands that the issue of the Italian south must be addressed, and that it has to be financed despite all the costs.

The situation in the Italian economy is not easy, but it is much better than in Greece. Italy does not have that many bloated social programs, it has developed industry and other sectors that will help it stay afloat. Italian bonds placed in European banks, unlike the Greek ones, are fairly predictable. What would they be exchanged for? In France the situation is not great either.

The endless change of governments (Italy had over 60 of them after the Second World War) does not present a particular problem either. In the event of a political crisis there are government officials and professionals of the second echelon, in whose hands, properly speaking, the economy resides. It is premature to bury Italy and even more so the Eurozone. It has a good chance of redeeming itself. "