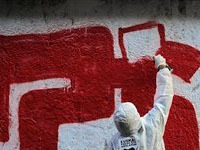 There will be one less terroristic threat in Europe. Basque group ETA announced a cease of the warfare with France and Spain, and one of its former leaders was sentenced to 105 years in prison. Yet, this does not mean that the Basque separatist problem (especially in Spanish territory) has been solved.

On November 7 The National Court of Spain sentenced the former ETA leader Francisco Javier Garcia Gastell to 105 years in prison. He was found guilty of murder of a politician Fernando Buesy and his guard 11 years ago, as well as two counts of personal injury and forgery. Aggravating circumstance was that the politician was killed by a car bomb. Sentences for terrorist attacks in Spain are significant.

The sentence was announced three weeks after another major event. On October 20 a message spread by the Basque newspaper Gara got lost in the message flow of the murder of the former leader of Libya Muammar Gaddafi. "ETA is resolutely stopping its military activities and armed struggle for independence and calls on the Government of Spain and France to begin the negotiation process to resolve the conflict," the statement of representatives of the terrorist group read.

The reaction of Prime Minister Jose Luis Zapatero was more than positive. "Let us live with the conviction of the victory of democracy, law and reason," he said in a televised address to the citizens. As a result, the "victory of democracy" was expressed in a very harsh sentence to one of the leaders of ETA. Yet, can the Basque issue be solved solely through a combination of judicial and police stick and calls for democracy?

ETA (Euzkadi Ta Azkatasuna, in the Basque language "Homeland and Freedom") is one of the most prominent terrorist groups in Europe. Its ideological basis was the idea of ​​establishing the Basque government independent from Spain and France. In the 19th century Basque nationalists raised the issue of an independent state. It would include modern Spanish provinces of Vizcaya, Guipuzcoa, Alava and Navarre, as well as French departments do Sul and Lower Navarre Labouré.

The Basques is the people whose language is not similar to any other European languages. This people had no need to prove that they are different from the Spanish (Castilian) or French. In medieval Spain they had certain autonomy, but it was eventually reduced. In France after the Revolution of 1789, all residents were declared "French" and no national autonomy was allowed. The French state is much more powerful than Spanish, and no less than 80 percent of the Basques have lived and continue to live in Spain. Therefore, the struggle to a greater extent is directed against Spain.

In 1936, the Republicans came to power in Spain and gave autonomy to the Basque country (with the center in the city of Bilbao). However, a Civil War broke out immediately where the General Francisco Franco came out as the winner. He was a supporter of a united and indivisible Spain, while the Basques wanted the opposite. In 1937, troops loyal to Franco wiped out Basque national shrine - Guernica. This horror story has been glorified by Pablo Picasso in his famous painting "Guernica".

Franco's iron fist ruled Spain until 1975. The Basque language was virtually banned - education, broadcasting, newspapers were published only in Spanish (Castilian) language. Some concessions were made only in the 1960s. The autonomy was not even discussed. In addition, people from other regions of Spain were resettled in Bilbao, San Sebastian and other cities. The Basques became a national minority in their own homeland.

Seeing no way out, the most radical part of the Basque nationalists resorted to terror. In 1958, several members of the illegal Basque nationalist party founded ETA. The party adopted Marxist ideology. There was some logic in it as the Socialists formed a significant part of the Republicans who fought against the right-wing conservative Franco. Yet its goal was not building communism, but the Basque nation-state - Euskadi.

After the first acts of violence ETA was subject to government repression. The Spanish authorities refrained from any official contacts with its representatives, even though informal contacts (according to some sources) did take place. With regard to the flywheel of terror, it was launched by radical Basque nationalists by the end of 1960s. ETA terrorists chose officials and law enforcement officers as their main target.

Perhaps the most talked about act of the ETA was the murder of Franco's successor as Prime Minister of Spain Luis Carrero Blanco. The militants were able to dig a tunnel in Madrid under the street where Blanco was driving and install explosives. On December 20, 1973 an explosion followed. The car with the official was thrown to the balcony of a nearby monastery, and it took some time before it was found. Police repressions ensued.

After Franco's death in 1975, the new Spanish authorities have embarked on the democratization of the country. Basque Country and Navarre were granted autonomous status, the Basque language, along with Spanish (Castilian), received an official status, and the population of the above mentioned areas gained the right to elect local parliaments. However, ETA insisted on complete separation from Spain. The truce proposed by the authorities was rejected by the radical nationalists.

Explosions continued. The "brand" style of ETA was calls warning of a bomb threat made shortly before the explosion. However, there were still casualties. Terrorist attacks occurred in Madrid, Barcelona, ​​Seville, and, of course, in the Basque Country. ETA militants attempted to blow up the Olympic Games in Barcelona in 1992, intended to kill King Juan Carlos and former Prime Minister Jose Maria Aznar, but failed. In 1998, the organization announced a truce, but it lasted only 14 months.

In addition to terrorism, radical nationalists did not shy away from politics. For many years the Basque Country and Navarre had Batasuna Party represented both in the local legislature and in the European Parliament. However, in 2003 the organization was banned. All attempts to re-register the party have failed. On the contrary - Spanish authorities started the arrests of Batasuna members.

When on March 11, 2004 monstrous explosions have claimed lives of up to 200 people in Madrid, Prime Minister Aznar tried to blame everything on ETA. However, it was not true, as the attacks were arranged by "Al-Qaeda." Aznar lost his seat, and the new Prime Minister Jose Luis Zapatero entered into a dialogue with the banned Batasuna. In the spring of 2006, ETA has decided to declare a "permanent ceasefire". However, the bombings in Madrid airport in December of that year and in Burgos three years later made the negotiations void. The Spanish authorities have embarked on the arrests of militants of ETA.

Since 2008, the ETA began to decline. Law enforcement authorities of Spain with the support of their colleagues from France began detaining the organization's leaders one after another - the last one to be detained was Arronategi in February of 2010 in Ibon. At the same time the court banned the activities of the Basque National Action Party that was also considered a political wing of ETA. Under the circumstances when the organization was decapitated, ETA considered it best to abandon the idea of the armed struggle. Such statements were made on January 10 and October 20 of this year.

However, the mere disappearance of ETA from the "big game" does not solve the acute Basque issue. In 2008, the Prime Minister of Basque Country Juan Jose Ibarreche proposed the idea to hold a referendum on self-determination and declare the territory an autonomous community that joined the Spanish state. In Madrid, the popular vote was banned. At the same time, surveys showed that the initiators of the vote could have easily gained the required 50 percent plus one vote.