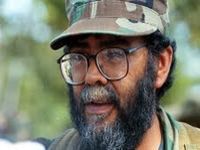 When Che Guevara was murdered, was the  rebellion in Latin America over? Do they think they will suppress the dignity of our America by murdering Alfonso Cano? Is this the "peace" of the genocidal President Santos? What will the hypocritical "statesmen" who embrace smiling, on behalf of "diplomatic realism" say now?

Let President Santos not forget that ....

After the death of Carlos Fonseca, founder and main leader of the guerrillas of the Sandinista Front for National Liberation (FSLN) of Nicaragua the insurgency defeated the shameful Somoza regime and the revolution triumphed. The same thing happened in Vietnam, with the death of Ho Chi Minh. A few years later the Yankees had to withdraw from Southeast Asia with their tail between their legs, defeated and humiliated when they felt before lords and masters of the Vietnamese people.

In many countries and societies, the assassination of popular leaders did not prevent the triumph of organized rebellion, when it had proposed a strategic power. We must learn from history.

The Colombian ruling class's belief (shared by their gringo masters from the north) that the death of a guerrilla leader may end with a process of mass struggle that remains active, with decades of confrontation. constitutes an illusion which is superficial, ignorant and banal, They are seriously mistaken if they think of submitting the insurgency by military means.

However, reports self-legitimating the Colombian ruling class (and their information monopolies that act as transmission belts in their psychological warfare operations) support this logic as the absolute truth. They speak for themselves. They look in the mirror and convince themselves to appease their fears.

A few days ago, a huge crowd of thousands and thousands of students, Colombian rebels, stormed the main cities of the country, in defense of free public education. And they challenged the police and other anti-riot forces. The same happened to the indigenous and popular movement, which already begins to rise, more and more organized. The bourgeois oligarchy of Colombia believes that murdering Alfonso Cano, chief leader of the Revolutionary Armed Forces of Colombia - People's Army (FARC-EP) will be able to shut down this whole popular mass movement (which is part of the insurgency). What an illusion! How shallow and innocent!

We know well who is Santos. We know his face... cynical, lecherous, depraved and abnormal when being photographed alongside other insurgents who are dead. Only a wicked, depraved one can celebrate the death in this way and with that kind of smile. Even the death of enemies. We saw these photos in the past, when he was Minister of Defense. We know him well. Too well ...

What matters here is not the opinion of this perverse man, but the mood of the people and the masses, especially youth. Of the Colombian people and the peoples of our America. People know perfectly well that, even if Simon Bolivar died, the struggle was far from over, and continued for two centuries. The same occurred previously with Tupac Amaru and Tupac Katari.

When José Martí was killed, Cuba continued to fight until finally overcoming the empires that it conquered. Did the fight end with the death of Martí? None but an ignorant (however much money you have, one remains an ignoramus) would believe that, with the corpse of Marti, the Cuban people's struggle is over. We might turn to each of our countries, each of our societies, each of our histories, and examples would multiply infinitely.

"Triumph or serve other flags. Even after death you will be useful," predicted Julio Antonio Mella, shortly before falling, assassinated, in Mexico. And he was right. The same will happen with the companion, comrade and commander Alfonso Cano, the leader of the Colombian insurgency. They can do whatever they want with the corpse. With the corpse of Che Guevara's hands cut off and buried in a tomb for the indigent. Thus they thought to end with the example of Che! They can manipulate the body of Alfonso Cano. However, with the example of Alfonso, they can do nothing.

And the presidents of Latin America? They follow the murderous hand shaking this sinister character of a millionaire businessman who, as Minister of Defense of Uribe, killed thousands of people, throwing them like animals in unmarked graves, the largest cemetery of the poor throughout the continent, over those of the military dictatorships of Chile, Argentina, Peru or Guatemala in 70 years. They found recently in Colombia 2000 corpses, corresponding to the murders of the Santos period as Defence Minister.

Will they go on speaking of continental "governance"? Will they continue delivering Revolutionaries to the butcher Santos, all in violation of international law, looking happy as if it was his birthday? And the journalists? Will they continue happily writing that in Colombia there is "democracy"? Is it not rather the time to rebel against the military control of information?

And the academics? Why, it is the time to write and analyze the struggles and "new experiences". Our America only mentions Cuba, Venezuela and Bolivia (Ecuador at most). What do the academics do with misunderstandings of the popular struggles in Colombia? It is perhaps because the armed struggle in Colombia continues to develop this theme and is not allowed in the core academic programs? Perhaps they consider the armed struggle in Colombia becomes an obstacle to receiving research grants and subsidies? Will the scholars begin to include the Columbia among the states that practise genocide as state policy or will they continue pretend not to understand?

In a word, after the killing of the rebel leader Alfonso Cano, who can make out they are naive, saying that Santos is different from Uribe?

We call on journalists who sincerely believe in freedom of expression, academics worthy to not allow themselves to be humiliated, including politicians, even without sharing the project of the guerrillas, not willing to get dirty, clutching the bloody hand of Santos.

Make no mistake. The struggle continues. Here nothing at all is finished.
At some point they will pay for their crimes.

Anastasio Somoza also felt powerful, splendid and impregnable ... And he still ended up defeated and dead.