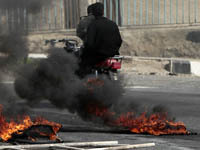 Qatar initiated the urgent meeting of the Arab League (the League of Arab States) on November 12, 2011. The meeting will be devoted to the situation in Syria. Last week, Qatar also summoned the session of the Arab League in connection with "repressions of the opposition by Bashar Assad's regime. As a result, Syrian officials promised to withdraw the troops from Homs, where violent clashes with the adversaries of the regime took place.

It has already become a tradition for Western leaders to criticize Assad's regime for "repressions against peaceful demonstrators". To which extent such accusations are true to fact?  Pravda.Ru asked expert opinion from a senior researcher of the Center for Arab Research, Vladimir Isaev.

"There are some things that make me doubt that the situation is like that indeed. Each of those demonstrations ends with violence when they kill police officers. Take a look at what happened in the beginning of June in Deir ez-Zor, where over 700 Syrian military men were killed. Western media described those events as "an uprising against the regime." They herewith recognized the fact that many participants of those "peaceful demonstrations" were not peaceful in their intentions at all. I am inclined to believe the official version of it all which says that certain external forces smear in terrorists to conduct terrorist activities.

"Syria has been a rogue state for the West and a number of Arab monarchies of the Persian Gulf for a long time already. They do not accept Bashar Assad's regime just because he is Iran's ally. Teheran created a stable channel to support Shiite organizations in Lebanon. So when we hear Western officials saying that Bashar Assad supports Hezbollah, we have to believe them - it is true. To all appearance, the weapons to support the movement are delivered via Syria. It is worthy of note that Damascus helps other Palestinian organizations, including Palestine Liberation Organization that used to struggle against Israel.

"The sitting Syrian president inherited all previous problems of the country from his father. The Kurdish problem is one of the most important ones of them. The Syrian Kurds are loyal. They welcome the positive changes that have happened to them recently. They now hold the Syrian citizenship, but they still want to have their own state.

"Another problem is connected with the Province of Hama. Thirty years ago, Bashar Assad's father brutally suppressed the uprising of Muslim Brotherhood. As many as 2,000 soldiers and officers were killed in the battles with extremists. There were many casualties during the siege of Hama as well. Needless to say that people neither forgive nor forget such things. They blame the regime.

"Bashar Assad's regime acts when it's already late to act. This is the weakest point of this regime. The country needs to conduct reforms, of course, but the government should look forward when running reforms. The adversaries of Assad's regime are certain that the regime is weak because it was forced to conduct certain changes. If so, they will ask more from the weak.

"If Bashar Assad's regime collapses, Syria will fall into pieces. The country will plunge into the abyss of never-ending tribal wars."