Americans ready to pay more than $100 million for Manas airbase 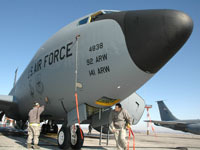 The new Kyrgyz authorities have once again raised the question of the future of a military air base Manas used for the operations in Afghanistan. This issue manifested itself even before the presidential elections in Kyrgyzstan. In the capital protests were held where the participants demanded the closure of the airbase, complaining of a sharp deterioration of the environment in the adjacent territory.

First of all, we are talking about emissions of unused kerosene during landing, which allegedly made a number of land parcels unsuitable for agriculture.

The American authorities acknowledged the issue. The representative of the U.S. Department of State Victoria Nuland said that Washington and Bishkek will hold consultations.

Was it only the environmental disputes that have led to a discussion of the base at Manas? In recent years, Russia and China have expressed dissatisfaction over the fact that the Americans have settled in Kyrgyzstan for "the long haul" under the pretext of conducting anti-terrorist operation in Afghanistan.

They were even more concerned about the U.S. plans to deploy long range reconnaissance aircraft at this airbase, which is clearly beyond the scope of the fight with the Taliban because NATO forces have traditionally used drones for the exploration of Afghan territory.  Head of the Department of Central Asia and Kazakhstan at the CIS Countries Institute Andrei Grozin commented on the situation in an interview with "Pravda.Ru":

"Is rocking the boat of Manas the handiwork of "pro-Russian candidate" Almazbek Atanbaev?"

"Of course, many Kyrgyz politicians tend to present certain actions in some way related to us as follows: "We are not Uzbekistan and Tajikistan, we are the true friends of Russia!" Currently, none of the representatives of Kyrgyz political elite can ignore the "Russian factor".

"However, in this case one should speak about a number of things that one way or another affect the situation. Ironically, what is happening around the base may be a consequence of non-governmental organizations (NGOs), in terms of the number of which Kyrgyzstan is the undisputed leader. There are a total of tens of thousands of NGOs existing on various grants.  The question is who exactly allocates money to them. For now the West does not have an unambiguous position on the need for further development of cooperation with the existing regimes in Central Asia. Take, for example, a known sponsor of NGOs Soros. All sorts of human rights activists living on his grants, like organization "Human Rights Watch", work in a quite specific direction: against the authorities of specific states. This is especially true with respect to the neighboring Uzbekistan and Karimov's regime.

"What is the point of conducting subversive work against the Uzbek or Kyrgyz regime? The main task in this situation is a blow to Obama. They say: look, he welcomes the overthrow of Gaddafi, but uses the American money to support the regimes that are not clearly better than the ousted Libya. The fact is that the environmental component in this case is indeed a serious one.

"As you know, Manas is the main center for transit of NATO supplies to alliance factions in Afghanistan. One can imagine the intensity of takeoffs and landings of huge transport aircraft "Hercules" that daily dump tons of unused aviation fuel in areas adjacent to the airbase. This is done in any case, regardless of fuel on board. This way the Americans are trying to protect themselves from all sorts of unexpected things during landing."

"What do you think the fate of Manas Air Base will be?"

"So far the game is played around it. The issue of Manas is raised nearly every year. For Kyrgyzstan, it has been a critical issue for the past six years. The first time it was raised under Bakiyev. It is clear that regardless of how pro-Russian the new president of Kyrgyzstan will be, he will not be able to remove this base before 2014. These are the conditions of the agreement previously entered into with the United States.  Why should Atambaev deprive the country of a solid revenue source? Currently Kyrgyzstan is paid nearly $100 million a year for the provision of rent. Every year, this revenue will only increase as the Kyrgyz authorities are successful at getting larger payments from the Americans whenever they ask for them. The United States fully understands the attitude of the Kyrgyz elite and accepts the rules of the game. It is in their interests to pay a little more to rid themselves of all sorts of surprises in such an important area as Manas.

"Besides, Russia does not particularly insist on its withdrawal. There is an understanding that the U.S. withdrawal from the region will only cause new problems that will have to be solved, by Russia as well."

"Has the issue of deploying long range reconnaissance aircraft in Manas been solved?"

"When the Americans tried to do it, they were met with such a strong opposition that they had to postpone the idea. Of course, the emergence of such aircraft would threaten our interests, because they could monitor the situation in the Urals, Western Siberia and the Altai. But first and foremost Bishkek was pressured by China that well understood that the main concern for U.S. spy planes were Chinese nuclear facilities in Xinjiang, especially in Lob-Nora."

"Are there those in Kyrgyzstan who are not happy with the presence of a Russian airbase in Kant?"

"There is no express dissatisfaction. First, the difference in the patterns of land use applicable to these two cases should be taken into account. Second, these two objects are exploited differently. Americans use Manas much more intensively than Russia uses Kant."