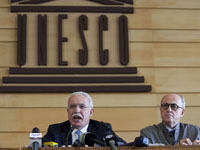 The U.S. punished UNESCO (United Nations Educational, Scientific and Cultural Organization) for accepting the Palestinian Authority (PA) into its ranks. According to the spokesman of the U.S. State Department Victoria Nuland, the U.S. had planned to transfer $60 million to UNESCO in November, but will no longer be doing this. The U.S. share in the financing of this structure was 22 percent.   The White House representative Jay Carney warned the leadership of UNESCO that the decision to accept the PA was "premature" because this would have an extremely negative impact on the Middle East peace process.

According to him, it undermines the progress previously achieved by the international community to establish fair and lasting peace in the Middle East.   Israel had the most violent reaction to the events. Its spokesman in the organization stated that UNESCO has experienced "a tragedy" and the adoption of PA is equivalent to science fiction winning over the science. He also accused the agency of a flagrant violation of the international law. No less severe was the reaction of the Israeli Foreign Ministry that said that it intended to reconsider its continued cooperation with this organization.

In addition, as stated by the head of the Israeli Foreign Ministry Avigdor Lieberman, his country is preparing for a complete breakout with the Palestinian Authority. In the meantime, Israel is planning to punish UNESCO according to the American "model." While the funds allocated by Israel are considerably smaller, it may cause the organization the most serious consequences, since it is unclear how it would close the resulting financial gap.   In this regard, American and Israeli experts do not rule out that this will lead to the bankruptcy of the United Nations Agency for Education, Science and Culture.

Concerns regarding this issue were also expressed by the UN Secretary General Ban Ki-moon. A UN special envoy for the Middle East Robert Suri likened the incident to a train crash that could bury the implementation of cultural and educational programs for children around the world.   The Palestine Liberation Organization (PLO) received the status of an observer at UNESCO back in 1974. Now we are talking about providing the Palestinian Authority a full membership in this organization.

On October 31, 107 countries voted for inclusion of the PA into UNESCO. Among them are Russia, China and France. 14 countries, including USA, Canada and Germany, voted against. 52 members from the UN, including the UK, abstained from the vote.

Thus, UNESCO was the first international organization in the UN where the Palestinian Authority was granted full membership. After that, the Palestinians hope to join the World Trade Organization (WTO).   They expect to use these achievements to strengthen the struggle for recognition of the PA state in the UN Security Council and to force Israel to give up some territories and settlements.   However, this does not explain the severity of the US-Israeli response. Sergei Demidenko, an expert with the Institute of Strategic Studies and Analysis talked about the reasons in an interview with Pravda.Ru:

"It is clear that the Palestinian leadership, realizing the futility of their apparent efforts to obtain full membership in the UN, decided to settle for the entry into UNESCO. For Abbas, it was necessary in terms of domestic consumption among the Palestinians. They say, look, we care about you and promote the interests of the Palestinian Authority in the world.  For this organization, of course, it is important to look after the numerous architectural monuments in Palestine. But in fact, by and large, membership in UNESCO does not provide any particular benefits to the Palestinians, neither at the political nor the diplomatic level.

The severity of the U.S. response is largely due to the fact that someone opposed the U.S. decision and should pay for it.   From the standpoint of Israel, it is necessary to block any attempts and long-term steps toward international recognition of the Palestinian Authority.  " Palestine is not a state, and therefore it cannot apply for membership in any international organizations." This is the credo of the Israeli leadership, and it is fully supported by Washington.  For the United States and Israel to withdraw their claims, the Palestinians must make a number of concessions, which originally was not feasible, including the refusal from Jerusalem, the return of refugees and so on.

What has happened proves once again that Israel was, is and will be an outpost of the United States in the Middle East. But it is not only the famous "Jewish lobby." Israel now, in terms of American leadership, is not just a reference point for the promotion of democracy, but something more.   In fact, now the elite of the two countries are closely and organically intertwined. This link will grow increasingly stronger with time. "  The development in the first place is beneficial for PA leader Abbas because of his permanent confrontation with Hamas for power. Now he will show off the membership in UNESCO to Palestinian radicals, indicating that the measure of his achievements incited an extremely harsh response from Israel and the U.S. It is possible that this "bonus" was given to Abbas deliberately.