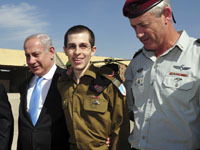 Although the issue of the price of the deal for the release of Gilad Shalit was extensively discussed in the media even before its conclusion, the majority of the Israelis embraced the news of the return of the prisoner with great enthusiasm. Such a reaction from the press and public opinion is quite understandable. The return of Gilad Shalit from Arab captivity alive and well six years after his abduction until recently seemed improbable.

In June of 2006 after a sudden attack by terrorists on an Israeli tank at a check point "Kerem Shalom" a new round of Israeli-Palestinian conflict has begun. The leftist government of Ehud Olmert and the IDF promised to do everything possible to free Shalit. In those days, the central Israeli newspapers wrote about the tragedy and the beginning of a possible invasion of the IDF in Gaza.

The only tank driver who miraculously managed to survive gave an interview to the newspaper "Yediot Ahronot" that was published on the front page. "A day earlier we were told that there was information about a possible attack by militants. We were told to increase vigilance," said Roy Amitai who was on duty with Gilad that night.  According to him, after the first explosion, the commander gave the order to leave the tank, but there was another explosion. After that he lost consciousness. Investigation into the incident revealed that the IDF made several missteps during the incident, as well as later. The hunt for the militants was organized only 2 hours later, and the precious time was lost.

Soon the Palestinians were given an ultimatum: if after three days the prisoner is not returned, a large-scale military operation in Gaza will begin. Indeed, the IDF soon tried to force the release of the abducted Cpl. In fact, the operation "Cast Lead" was aimed primarily at destroying the terrorist infrastructure.

A year later, few people believed in the possibility of the release of Gilad Shalit with the regular army or Special Forces. Soon the talks with the extremists commenced (where Egypt acted as the main intermediary). The price for the exchange of prisoners, declared by Hamas, did not suit Israel, and the negotiations dragged on. Meanwhile, while Shalit was a prisoner, there have been significant political changes in Israel. When the Lebanon war ended in 2006, an investigation to verify the results of combat operations against "Hezbollah" was initiated against left-wing government. In general, the campaign was considered unsuccessful. Olmert's government resigned. It was replaced by the cabinet of Netanyahu, who spent much time in opposition. It seemed that the negotiations with terrorists could be forgotten.

However, in early 2011, the information suddenly appeared on the progress in the negotiations for the release of Israeli corporal who was in the hands of Hamas. On October 11 an agreement was finally reached on the exchange of the Israeli soldier for a thousand Palestinian prisoners.  After the official sources confirmed the release of Shalit, journalists literally besieged his house. Many Israelis took to the streets to celebrate the happy event. On October 24, a few days after the return of Gilad from captivity, he was visited by Israeli President Shimon Peres. After his visit, the family asked reporters not to bother them in the near future.

However, Israeli media's assessment of the deal on the exchange of prisoners of war was not so unequivocal. The newspaper "Haaretts" has criticized Benjamin Netanyahu for his tendency to present the release of Gilad Shalit as his personal achievement. "Maariv" does not support the euphoria surrounding the deal with the terrorists. While the outlook is not that happy, Israeli media is making a big effort to instill the idea of ​​unconditional national consensus around the exchange transaction, the newspaper noted.

The media pounced on the story of the liberation of Shalit not only because it was a really important and exciting event. The media sought to impose a new political and social agenda that is far from reality, wrote columnist Michal Aaaroni. Ida Nudel published an article on the site of channel 7 ITV questioning whether a soldier who surrendered to captivity can symbolize Israel. The author lamented that the representatives of the government circles hyping the theory of heroism of the soldier Shalit did not stop to think for a minute about the live of this young man after everything calms down.

However, the reaction of the international community to the exchange of prisoners between Israel and Palestine was positive. It is worth noting that most European diplomats officially welcomed the deal. It is considered a good sign for the continuation of peace talks between Israelis and Palestinians.  UN Secretary General Ban Ki-moon voiced his position on this matter. He said that this deal would make a positive contribution to the stalled peace process in the Middle East. He added he was heartened by the exchange made after many years of negotiations. UN called for the release of Gilad and all Palestinians whose civil rights were trampled once upon time. Thus, Israel was able to increase its credibility in the eyes of the world. Another question is how the deal would affect the security of the country's future.

The danger will traditionally come not only from the Gaza Strip, but also from the North. After the completion of the exchange of prisoners, "Hezbollah" is already celebrating the victory of its colleagues. According to Lebanese terrorists, the credit for the successful kidnapping goes to the leadership of Hamas, and it is a clear confirmation of the appropriateness of their chosen path in the fight against "Israeli occupation" - armed resistance and terror, Israeli media reported referring to channel Al -Manar controlled by "Hezbollah".

In the present circumstances, when a territorial dispute between the warring parties is not resolved, the exchange of prisoners may be only a temporary cause for the cease-fire with the Palestinians. Hamas and Islamic Jihad have become stronger due to the ongoing arms smuggling from Egypt and Syria. In addition, extremists have repeatedly stated that they intend to continue to make forays to kidnap Israeli citizens.