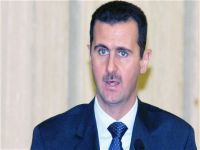 Syrian President Bashar al-Assad warned that an attack against Syria by Western countries could trigger a scene equal to that of Afghanistan. In an interview published in the Sunday edition of the British Sunday Telegraph, the first granted to a Western journalist since the early protests for seven months, Assad said that any problem (a possible military intervention) in his country would cause "an earthquake" that "burns the whole region."

Since March, Syria has been the scene of riots and armed insurrection against the Assad regime. It is estimated that 3,000 people have been killed, in numbers provided by the UN (United Nations).

At least 20 Syrian soldiers were killed on Saturday and 53 others were injured in clashes against suspected military deserters in the city of Homs, according to the Syrian Observatory for Human Rights.

In the interview, Assad affirmed that his country is different "in all aspects" from Egypt, Tunisia and Yemen, where there were revolts against those regimes recently. "The story of Syria is different. The politics are different," he stated.

The president noted that "Syria is now the center of this region," and likened the country to a "geological fault line, and added: "If you play with the ground, you will cause an earthquake...Do you want to see another Afghanistan or tens of Afghanistans?"

The official acknowledged that his forces had made "many mistakes" in the early part of the insurrection, but noted that currently "We are only fighting terrorists."

President Assad insisted that he had responded differently to the Arab Spring than other deposed Arab leaders. "We didn't go down the road of stubborn government," he said. "Six days after the protests began, I commenced reform. People were sceptical that the reforms were an opiate for the people, but when we started announcing the reforms, the problems started decreasing. This is when the tide started to turn. This is when people started supporting the government."

Some most likely little known facts about President Assad are that he studied Medicine at Damascus University and graduated in 1988, and he specialized in Ophthalmology at Tishreen Military Hospital before studying in London until 1994.

He headed the Syrian Computer Society, SCS, in 1995, and worked to spread the culture of information technology nationwide. Information and technology, communication...sounds like the things that go into making a "dictator."

The country has been dealing with an armed insurrection, the invasion of foreign elements who have been firing at both police and demonstrators. A list of foreign paid elements was recently published who are responsible for the deaths of many people.