USA to Palestine: No, thank you 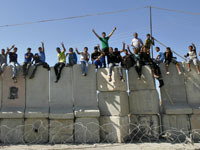 The group of international mediators - the USA, the EU, Russia and the UN - activated their efforts in September 2011 to solve the Palestinian problem. Fatah leader and the head of the Palestine Authority Mahmoud Abbas played an important role in the process. Abbas applied for Palestine membership at the United Nations. One hundred and thirty-one countries have already de-facto recognized Palestine's independence.

In September, Abbas appeared at the session of the UN General Assembly with an appeal to recognize Palestine's independence. Interestingly enough, Antigua and Barbuda, a small country in the Caribbean, hurried to do it soon after Abbas's speech. Several Latin American countries announced their recognition of the Palestinian state last year.

Brazilian President Lula da Silva was one of the first world leaders who responded to Abbas's appeal. Argentina and Brazil officially supported Palestine's intention to get back to the borders of 1967. Spokespeople for the Foreign Ministry of Israel expressed their regret in connection with the decision made by the Latin American countries. Guyana followed the example of Brazil, Chile, Uruguay, Bolivia and Ecuador and supported Palestine in January 2011.

The Israeli administration has been concerned about the geopolitical changes that began to take place in Latin America at the end of the 1990s.

"There is no doubt that the Venezuelan-Iranian alliance and its growing force in Latin America go a long way towards explaining South America's sudden urge to recognize "Palestine." But there is more to the story.

"The final trend that the media in Israel have failed to notice is the impact that US foreign policy in South America and the Middle East alike has had on the positions of nations like Brazil and Argentina towards Israel. During the Bush administration, US Latin America policy was an incoherent bundle of contradictions. On the one hand, the US failed to assist Chavez's opponents overthrow him when they had a chance in 2004. The US similarly failed to support Nicaraguan democrats in their electoral fight against Sandinista leader Daniel Ortega in the 2007 elections. On the other hand, the US did foster strong alliances with Colombia and Chile," Israeli journalist Caroline Glick was quoted by Zman.com as saying.

As for Europe, Norway was the first country that set out its readiness to recognize Palestine (in January 2011). France supported Norway's initiative in March.

French President Nicolas Sarkozy put forward a compromising solution during the further discussion of Abbas's initiatives at the UN. Sarkozy put forward a suggestion to recognize Palestine's independence and accept the country as a UN member, albeit only as an observer. The French initiative turned out to be unacceptable for Israel because it came at the time when peace talks had not been completed.

It is worthy of note that the official position of France mirrors the public sentiments. According to opinion polls, 54 percent of respondents support the establishment of the Palestinian state. Twenty percent are against the idea. One should also bear in mind the fact that Muslims make up nearly ten percent of the country's population.

The French administration has trying to get closer to the Arab world for many years. The relations with Israel remain intense, though. It is worthy of note that Sarkozy's recent statements raised concerns with the Jewish community of France. We have to acknowledge that the French president, who returned from the talks about the Palestinian problem in New York, sounded rather harsh indeed against the background of another aggravation of the Arab-Israeli conflict.

"It is silly to talk about a Jewish state," Sarkozy said in reference to Prime Minister Binyamin Netanyahu's assertion no true peace could be made until the Palestinians recognize Israel as a Jewish state.

"It would be like saying that this table is Catholic," he added. "There are two million Arabs in Israel."

Germany does not hurry to take this or that side in the discussion of the status of Palestine. Officials with the German administration believe that Palestine's sovereignty must be recognized. They acknowledge, however, that it is not possible without concluding a full-fledged peace agreement with Israel.

Turkey has also become more active in supporting the Palestinians.  Moderate Islamists of Turkey with Prime Minister Erdogan at the head demonstrate their tough position towards Israel. They say that Turkey is ready to support the residents of the Gaza Strip despite warnings from Israel.

The Palestinian embassy opened in Turkish capital Ankara in July 2009. Mahmoud Abbas attended the ceremony and said that Israel must stop building its settlements. Turkish officials said that they would open the embassy in Palestine, in Eastern Jerusalem.

Dozens of countries support Palestine. Many of those countries play important roles in international affairs. However, the majority of analysts do not expect a diplomatic breakthrough in the near future. The United States intends to use the veto right not to let the Palestinian state happen. US President Barack Obama believes it is impossible to reach peace on the base of only UN resolutions.

Now the expert committee will have to conduct a number of sessions to prepare the report that will shed light on different points of view about the future status of Palestine. Most likely, it will be a long process because the USA, the EU and Russia are too far from elaborating a compromising solution for the Palestinian problem.