NATO to stay in Libya for good? 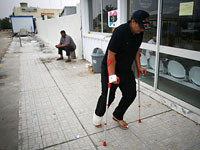 The death of Colonel Gaddafi made many assume that NATO was going to finish its operation in Libya. Sources from the alliance said that it could happen during the next couple of days indeed. However, it is too early to say that the Libyan operation is over. Ali Tarhouni, an official spokesman for the National Transitional Council asked the NATO administration to prolong its mission in Libya for at least one month.

Why does the Council need NATO to stay? It seems that the city of Sirte has been taken. News agencies report that practically all buildings in the city have been destroyed. Rebels continue to find and destroy Gaddafi followers and they do not need NATO's help.

Saifa Gaddafi said that he would continue the struggle and revenge for the death of his father. It is too early to draw the line in this story. It is not ruled out that the Libyans will rebel again once they have come to realize the advantages of "Arab democracy."

Most likely, the leaders of the National Transitional Council of Libya are concerned about their future. The leaders of the Libyan Islamists stated soon after Gaddafi's murder that the country would live under the laws of Sharia. The announcement was made as an accomplished fact, even though the West and certain local liberals were dreaming about Libya making a democratic choice.

However, it is obvious that Islamists intend to deprive the Libyan people of all the rights that they received from Colonel Gaddafi, including the right to vote. European officials expressed their concerns about the extremist aspiration to usurp power. Nevertheless, even Libya's acting Prime Minister Mahmous Jibril said that the new Libya needed Sharia.

In the meantime, the countries that took part in the operation against Colonel Gaddafi continue to count their losses and send their servicemen home. Spain promised to withdraw its troops from the country before October 31.

NATO has not made a final decision about the further participation in the Libyan affairs. The alliance intends to conduct consultations with the UN and the National Transitional Council of Libya before making the decision, sources from the headquarters of the alliance said.

Western experts believe that the NTC is not willing to take full responsibility for the security of Libya. The Council intends to share this responsibility with NATO. However, the West fears a possibility of being involved in the long-term standoff, which implies additional losses and extra costs.

At the same time, neither Brussels, nor Washington will let the Libyan Islamists destroy the NTC. Moreover, it is not clear whether Qatar is going to withdraw its contingent, which also took part in the destruction of Gaddafi.

According to France Presse, the Chief of Staff of the Qatar Armed Forces, Bel Ali El-Atia acknowledged the participation of hundreds of his military men in the battles on the territory of Libya. It is not clear whether Qatar is going to withdraw its troops from Libya. The Qatari servicemen are not going to defend the NTC from Islamists. Quite on the contrary, NTC officials believe that Qatar, being a very influential force, would take the side of the Islamists.

What about the tribes? The majority of tribal leaders in Libya are not going to acknowledge the dictatorship of the Islamists. What is worse, many of them do not recognize the puppets of the West from the NTC.

There is no single position among the clans and the tribes. They no longer have the referee (Gaddafi) who would listen to them and help them solve their problems.

To put it in a nutshell, a handful of Libyan liberal intellectuals runs the risk of building true democracy in the form of "war against all."