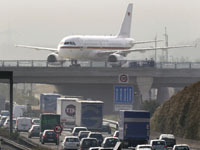 Last week, the German counterintelligence arrested the spouses, who were suspected of industrial espionage. It was said that the spouses were working for Russia's Foreign Intelligence Service.

The German media do not have the right to expose the last name of the suspects. The spies, named only as Heidrun and Andreas A., have not been charged yet. Russian mass media say that the last name of the spouses is Anschlag. It was said that the two spies arrived in the Federative Republic of Germany 20 years ago from South America. It just so happens that the KBG recruited them during the time when officer Vladimir Putin was serving in Germany.

We would like to remind here that the Foreign Intelligence Service declared itself to be the official successor of the First Principal Directorate of the KGB in December 1991. It was a foreign intelligence department, whereas Putin always served in counterintelligence. To put it simply, Putin's job was to neutralize the colleagues of the detainees - he did not recruit and infiltrate anyone. Therefore, the sitting prime minister knew nothing about the activities of the two spies.

Heidrun and Andreas, who held Austrian passports, were living in the south-west of the FRG, in Landau, from 2002 to 2010. According to the Rheinpfalz newspaper, Andreas was collecting industrial secrets and sending them to Russia's Foreign Intelligence Service. Andreas, a professional machine-builder, was working at the firm called Faurecia (car supplies). He also owned an innovation center in Rheinland-Pfalz province.

At the end of 2010, the spies were supposed to move to Marburg, where they rented a one-room house. Heidrun, 51, was arrested in that house. The woman was supposedly sitting in front of the transmitter and was about to receive a code telegram. Andreas, 45, was conducting his illegal activities at the time when he was officially serving as a car supplier in Heuchelheim in the state of Hesse. The man was arrested last week on Tuesday night by the federal department of criminal police and GSG 9 antiterrorist department.

The Rheinpfalz reporters found out that the married couple spoke German with an east-European accent. The couple also has a 20-year-old daughter, a student of a medical college in Marburg.

There is very little information about the spies. There are just a few facts and too much speculation on the subject. They recollect the most recent spy scandal between the USA and Russia and pay tribute to Anna Chapman, of course. The latter was nicknamed in Germany as Agentin 00Sex and Agentin 90-60-90.

It is funny to read the comments of Russian experts. When someone speaks about the crisis of Russia's Foreign Intelligence Service, they say that there is no ideology in the system that could serve as motivation for others. Do such experts mean that the people, who helped the USSR obtain Americans nuclear secrets, were industrial spies? Was there anyone who worked for the sake of the idea only?

It goes without saying that it is much better to have such an agent rather than to get a traitor for money. Colonel Alexander Poteev was reportedly paid $55 million for his treason.

Another expert said that he reads the reports from the Federal Office for the Protection of the Constitution (BfV) every year. The expert said that he was aware of what the German press was writing about the spy scandal. The expert said in an interview with the BBC that the Russian spies were so old that they did not know how to transmit cryptograms via the Internet. They preferred to contact the command via radio sets.

This is a very original assumption, taking into consideration the fact that Andreas is the same age with President Medvedev, who is very attracted to new technologies.