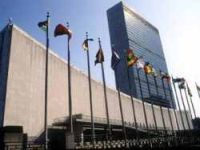 Towards the twentieth condemnation of U.S. blockade against Cuba

While the United States intensified its economic blockade against Cuban trade and finance, the UN General Assembly advanced a new condemnation almost unanimously, against this siege, the twentieth in 20 consecutive years.

The topic will be considered by the highest organ of the United Nations next Tuesday, when it will vote on a resolution that will insist lifting the measures put in place for almost 50 years.

A similar document was adopted last year in the same plenary session by 187 countries, as opposed to only the votes and abstentions from the United States and Israel, and of the Marshall Islands, Micronesia and Palau.

The theme was explained in detail in a report distributed here under the title "Necessity of ending the economic, commercial and financial embargo imposed by the United States of America against Cuba."

In this text, the Cuban government maintains that U.S. measures against the Caribbean island persist and intensify despite increasing demand and imperatives of the international community for its elimination.

It also underlines that the current U.S. government has taken some positive steps, but they are insufficient and limited and not intended to change the intent of any laws, regulations and provisions that make up the policy of the blockade against Cuba.

In this regard, it recalls the different laws regarding the blockade are not only maintained, but also conform to the legal architecture of a policy that qualifies as an act of genocide and war.

Because of this siege, Cuba cannot export and import products and services for or of the United States, or use the U.S. dollar in international financial transactions or have accounts in that currency in banks of third countries.

Cuba cannot have access to credit from banks in the United States, its subsidiaries in third countries and international institutions like the World Bank, International Monetary Fund and the Interamerican Development Bank.

Cuba considers that the official U.S. rhetoric aims to persuade international opinion that the current administration in the White House has introduced a policy of positive change.

But the island remains unable to trade with subsidiaries of U.S. companies in third countries and nations of those entrepreneurs interested in investing in Cuba are systematically threatened and included on a negative list.

Similarly, Washington intensified the pursuit of Cuba's international financial transactions, including those originating from multilateral organisms for cooperation with the island.

This line of attack is one of the hallmarks of the application of the policy of the blockade under the current administration, said the document presented to UN member countries.

At the same time, it says, the anti-Cuban groups that control the Foreign Relations Committee of the House of Representatives want to prevent the presence of foreign companies for oil exploration in Cuba's exclusive economic zone.

The document reveals that the direct economic damage caused to the Cuban people by the application of the siege by the United States from December 2010 until the current time amounts to a figure that exceeds $104 billion.

But when one takes into account the depreciation of the dollar against the value of gold in international financial markets, the violation of the Cuban economy is in excess of 975 billion dollars.

From all the above that was exposed, the Cuban government shows that the U.S. President, Barack Obama, has kept intact the policy of blockade, a siege that violates the right to peace, development and the security of a sovereign state.

It is also a violation of the human rights of all the Cuban people and of the constitutional rights of Americans, denying their freedom to travel to Cuba, and many other states for its extraterritorial nature.

The Cuban government points out that Obama has sufficient privileges to modify significantly the blockade against Cuba, even without the intervention of Congress, and calls for its withdrawal "without delay and unconditionally."