The mystery of Muammar Gaddafi's death 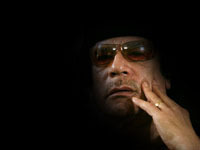 The National Transitional Council of Libya в delivered the official report about the death of the former head of Jamahiriya, Muammar Gaddafi. Prime Minister of Libya Mahmoud Jibril said in the beginning of the news conference in Tripoli that the NTC had been waiting for this moment for a long time. Gaddafi is dead, Jibril said.

According to Jibril, the colonel received lethal wounds in the shootout between his forces and the opposition army in the city of Sirte, Reuters said. Gaddafi could die from the bullets of his followers, the news agency said. A forensic expert found it difficult to say whether the colonel was killed by revolutionaries or his own soldiers.

The prime minister said that Gaddafi was shot in the head. Jibril confirmed the information saying that the colonel had been taken prisoner alive. However, he suffered a lethal wound and died before he was taken to hospital.

Supposedly, when the battles in Sirte became too intense, Gaddafi decided to leave the city and hide in the desert. On Thursday morning, the colonel departed from the city in a convoy of vehicles. NATO's unmanned aircraft detected Gaddafi's vehicles and attacked them. Afterwards, the colonel's supporters tried to hide him in a drainpipe.

Officials with the National Transitional Council of Libya confirmed that Gaddafi was found in the drainpipe indeed. They took him out of the pipe and tried to take the colonel to a safe location. The vehicle, in which they were traveling, found itself in the shootout between colonel's followers and adversaries. Mahmoud Jibril stressed out that Gaddafi was killed incidentally. There was no special order from the authorities to liquidate him.

In pictures: The death of Muammar Gaddafi

One of the soldiers of the new Libyan regime told the BBC that it was him who found Gaddafi in the drainpipe. The young man showed the gold pistol to reporters and said that he had withdrawn the pistol from the colonel when he was detaining him. Arab TV channels, particularly Al Arabiya, reported that the man's name was Ahmed Al-Shabani. It was the 18-year-old soldier, who supposedly shot the colonel. The media had doubts about the words from the young man. Al Arabiya subsequently deleted the article about Gaddafi's killer from the website.

The body of the killed colonel was photographed and filmed immediately. Al Jazeera showed the video footage made by one of the NTC fighters. The video showed the bloodstained and semi-stripped Gaddafi being dragged along the streets.

On October 21, Gaddafi's body was demonstrated to Western and Arab reporters working in Libya. Multiple photos, which were carried by practically all mass media in the world, showed the semi-naked colonel covered with bloodstains. Several bullet holes can be seen on his body, including the lethal wound in the temple. Gaddafi's body was lying on the floor during the demonstration.

The journalists were also shown the body of one of Gaddafi's six sons, Mo'tassim. He was shot in the chest.

According to Reuters, there were too many people who wished to take pictures of the killed colonel and his son. The people had to stand in lines to take the photos.

Muammar Gaddafi will be buried according to Muslim traditions in a secret location. The authorities decided not to expose the place of his burial not to make his grave become a site for pilgrimage.

Venezuelan President Hugo Chavez stated that Gaddafi would most likely become a martyr.  Chavez was Gaddafi's friend and supporter.

Mansour Dao, Gaddafi's security chief, said in an interview with Al Arabiya TV channel that the colonel was worried about Libya, but not his life. Dao was captured when a column of Gaddafi's followers was trying to break through the encirclement and escape to the area near Sirte, RIA Novosti reports.

According to Dao, Gaddafi wanted to move to his native city of Sirte soon after the rebels took Tripoli. Gaddafi did not participate in the administration of combat operations - his son Mo'tassim was in charge of the war actions, Dao said.

Gaddafi was worried about the events in Libya and the large number of casualties, Mansour Dao said. An Al Arabiya journalist said that it was strange for him to hear about Gaddafi's worries. "You killed 50,000 people in the conflict," the reporter told Dao. "Who said that we killed 50,000 people? Al Jazeera and Al Arabiya - you broadcast lies," he general responded.