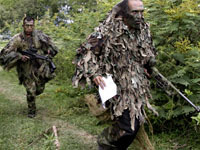 US troops landed in Africa's Uganda on October 19. US troops will also be deployed in the Democratic Republic of Congo, in the Central African Republic and in Southern Sudan. What does Washington need in Africa? The goal of the operation is to help the countries of the region struggle against Lord's Resistance Army terrorist group. Sources at the Pentagon and Obama's administration say that the primary goal of the operation is to destroy the leader of the group, Joseph Kony.

The dispatch of US troops to the black continent has already raised concerns with US senators, presumably Republicans. The discontent of McCain and Co. can be explained with growing contradictions between the president and the Congress. The latter is not happy about the fact that the troops had been sent to Africa without its approval.

John McCain stated that he had served under four presidents, but none of them was so unwilling to cooperate with the Congress. McCain added that he feared the deployment to Africa could become "a commitment that we can't get out of."America may not handle another conflict properly, the senator said. The country finished the current financial year with a colossal budget deficit of $1.299 trillion, which made up 8.7 percent of the national GDP.

Officials with the Obama administration say that there will be presumably US special forces present in the conflict zone. The forces will supposedly train local soldiers and do nothing else.

However, it appears that special forces are in the minority. It goes about 100 servicemen who will be deployed in Uganda. It is not clear what goals thousands of other US soldiers will pursue.

The US has dispatched from 3,100 to 4,100 servicemen to the above-mentioned African states. It was also said that the US would send even more men to Cameroon. If this information is confirmed the mission of the United States on the black continent will raise too many questions.

The fighters of the Lord's Resistance Army (LRA) refer to themselves as African Christians. However, they are brutal murderers, cannibals and kidnappers. They have kidnapped thousands of people, including children, whom they turned into guerrilla fighters and sex slaves.

The organization has brutally exterminated tens of thousands of people since 1987 when it was founded. Two million people became refugees because of the group.

The core of the group consists of the Acholi people. Those people used to be suppressed by local authorities in the countries of their residence. This was especially noticeable in Uganda. A mutiny erupted in the country in 1987, which laid the foundation to the LRA. The Uganda authorities would send the Acholi people to concentration camps. As a result, the LRA fighters had to recruit juvenile soldiers from other nationalities.

The countries, where the LRA conducts its subversive activities, try to arrange large-scale operations to destroy the terrorist group, although to no avail. They conduct the operations in the territories that are rather difficult to approach. The guerrilla fighters know those territories a lot better. It would be enough to mention that intelligence information about the quantity of LAR members vary from 500 to 9,000 people.

It appears that Washington has decided to put an end to this organization. Obama signed a decree about the disarmament of the group in May 2009 to restore lawfulness in northern Uganda. The US Senate approved the decree in May 2010.

It is not the first attempt of the international community to get rid of the group. The UN has been trying to destroy Joseph Kony since 2006. The Americans decided not to interfere in the conflict - they asked their allies from Central America to help instead.

The actions of Guatemalan special forces in the Garamba National Park in 2008-2009 in the Democratic Republic of Congo. The attempt showed that Kony's gunmen were not just the cowards who could only exterminate the civil population. One of the battles in 2009 ended with the destruction of all Guatemalan soldiers. The LRA gunmen obtained state-of-the-art US arms, which the Guatemalan military men received from the United States.

No one has ever been able to destroy the Lord's Resistance Army so far. It is not ruled out that the United States tries to settle in Central Africa under the guise of the anti-terrorist struggle. This region is rich with natural resources, so the States may try to oust the French and the Chinese from the region.