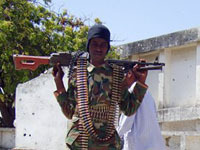 The Kenyan army in cooperation with governmental forces of Somalia conduct a military operation in the south of the country against al-Shabab Islamist group. It is not the first time when Kenya conducts such actions on the territory of Somalia. However, the operation that was launched on October 16 became the largest.

Armored vehicles, airplanes and helicopters take part in the operation. Kenyan and Somali officials say that the operation has been developing successfully. According to Somali Islamists, they have downed a Kenyan helicopter with a group of commandos on board.

"Kenya violated the territorial rights of Somalia by entering our holy land, but I assure you that they will return disappointed, God willing. Mujahideen fighters will force them to test the pain of the bullets, " Senior al-Shabaab leader Sheikh Hassan Turki stated.

Now the organization prepares a counter-attack against "foreign invaders and traitors."

Somali extremists have become especially active on the territory of Kenya recently. It is foreign specialists and tourists that suffer from those attacks in the first place. A series of attacks against foreign nationals was conducted in Kenya in September-October. Four people - two citizens of Spain, and two women from Britain and France - were kidnapped. Another British national was killed.

Kenyan officials said that the attacks were orchestrated by Somali Al-Shabab organization. Officials with the Ministry for Tourism of Kenya say that they are capable of guaranteeing safety to foreign tourists in Kenya. However, it is obvious that the recent events in the country have made many tourists change their plans about the holidays in Kenya. The tourist industry of the country has been suffering serious losses recently, because many Europeans refuse to go there.

At night of September 10, gunmen attacked Kiwayu Safari Village Hotel. The hotel is situated not far from the border with Somalia. The gunmen killed British national David Tebbutt and kidnapped his wife Judith.

At night of October 1, gunmen captured an elderly woman from France. The woman was aged from 66 to 75, various sources said. The gunmen took the woman away to Somalia by boat.

Afterwards, Somali gunmen attacked a vehicle of Doctors Without Borders (Medicines Sans Frontieres) organization. The doctors were working at the refugee camp in Dadaab. The gunmen wounded the driver and kidnapped two female citizens of Spain.

Kenyan military men demonstrated their inability to either stop or detain the attackers. Nothing is known about the fate of the kidnapped foreigners.

It is worthy of note that Somali guerrillas prefer to target European women in their attacks. Not so long ago, a group of Somali pirates hijacked a Danish yacht near the Seychelles. The pirates seized a 14-year-old Danish girl and told her that she would have to become the wife of their elderly leader. Fortunately, the girl was rescued from the captivity in exchange for a large amount of money.

Kenya's problems in the north began 20 years ago, when Somalia stopped its existence as a joint state. The regime of Siad Barre collapsed, and the nation split into several entities. Two of those entities in the north - Puntland and Somaliland - turned out to be the most stable ones. The state of affairs in the center and especially in the south of the country was much more complex. Conflicts between various feuding groups never stop there. The so-called governmental forces are not recognized anywhere, except for the former capital of Mogadishu, maybe.

Will Kenya manage to defend itself? Kenyan defense officials say that one should establish a special buffer zone in the south of Somalia. The zone would be controlled by the governmental forces of Somalia and Kenya.

However, Al-Shabab, which has already earned the reputation of African al-Qaeda, has hundreds and thousands of well-trained gunmen, who receive the financial support from other countries. Kenya has all chances to become involved in a long-term standoff, the outcome of which is hard to predict.