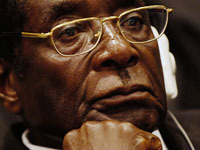 British billionaire Richard Branson tries to deny his participation in the plot against Zimbabwean leader Robert Mugabe. Reportedly, Branson played the leading role in the plot.

The attempt was made in 2007. However, the information about it appeared just a while ago: the news leaked from the US Embassy in Pretoria, the capital of South Africa. Foreign journalists have thus concluded that Branson was trying to topple the "Zimbabwean tyrant" with the help of $10 million. This created the foundation to remove President Mugabe from power, Zimbabwean news agencies aid.

According to the New Zimbabwe, it goes about the bribe for Minister for Information Minister Jonathan Moyo. The minister, in his turn, was supposed to bribe influential elders and join forces with them to arrange a coup.

Moyo, the newspaper wrote, organized a "casual encounter" for Branson and three influential Zimbabwean personas at the International Airport of Johannesburg. The meeting took place in April 2007. The men discussed possibilities for removing Mugabe from power. Another topic for their discussion was devoted to the future of Zimbabwe without Mugabe. A lot was said about the need to establish democracy in the African country. Branson was particularly interested in special regulations of the new constitution of the country, which would provide legal immunity to foreign businesses.

For some reasons, the plot has never materialized. Sir Richard Branson is now trying to minimize the consequences of the diplomatic leak for himself. The billionaire refuses to acknowledge the fact that he was trying to topple Mugabe. Branson claims that the amount of ten million dollars was supposed to bribe the Zimbabwean president to make him leave.

Nevertheless, both Zimbabwean and British publications are certain that the billionaire will not be able to prove his point because the leaked information turned out to be true.

There are other interesting aspects to the story. How could Mr. Branson bribe Mugabe if the latter holds the fortune that is 200 times the size of the promised bribe?

It would be ridiculous to try to bribe the dictator, whose fortune is evaluated at $2 billion at least. Mugabe also owns castles in Scotland and several islands in the Bahaman archipelago.

The source of the leak has been determined - the US Embassy in the South African Republic. It is possible, of course, that the Americans distributed the information deliberately. This version does not seem to be real because it casts doubts on the Americans in the first place. In particular, it goes about US Ambassador to South Africa Erica Bost, who reportedly supported Branson with the help of pro-US NGOs.

It is also possible that it was the authorities of the South African Republic that disrupted the plot.  The authorities could simply intercept the information about the US-British plans. Mr. Branson prefers to stick to this version too.

The participation of the South African Republic in this case is easy to understand. Robert Mugabe used to be one of the staunchest supporters of Nelson Mandela.

As for Britain's efforts against Zimbabwe, they are being taken to retrieve the economic positions, which the country lost during Mugabe's rule. Britain was controlling the economy of Zimbabwe until the end of the 1990s. Britain was in charge of two most lucrative fields - agriculture and the mining industry, especially the production of noble metals.

The relations were ruined at the end of the 1990s. However, Mugabe has his own claims to present to London and the West. Before the middle of the 1990s, Mugabe was dancing to the tune of the IMF and British financiers. The economic reforms, which Mugabe was running that way, had led to the results, which Mugabe was not expecting at all. The West accused Mugabe of the failure, but the Zimbabwean president began to expel European farmers from his country. The withdrawal of the foreign capital was accompanied with the unexampled economic decline.

Needless to say that the West subsequently reproached Gaddafi's old friend Mugabe of human rights violations, forged elections and so on and so forth. No one was paying any attention to those issues when Mugabe was carrying out the orders from the West. Moreover, in 1994, Mugabe became a Cavalier of the Order of the Bath of Queen Elizabeth II. He also became a doctor of a number of British universities. He was stripped of the titles afterwards, though.

The West has been trying to topple Mugabe for more than ten years already. It was earlier said that foreign special services were trying to work with the opposition. All of those attempts failed. Now it is about time business should take the stage. Now we can witness the evolution of the British colonialism. Britain used to send expensive military missions to other countries. Now the country is trying to use business opportunities instead.

The former colonizers have a serious competitor now - China. Unlike the West, the Celestial Empire tries to receive the maximum from Mugabe without reproaching him.