Ban Ki-Moon: An insult to the memory of Dag Hammarskjöld 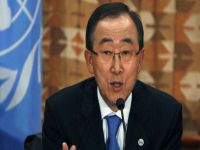 The former UN Secretary-General Dag Hammarskjöld died fifty years ago in an air crash in central Africa while flying to Katanga to negotiate a cease-fire. As the current Secretary-General Ban Ki-Moon stood by his tombstone in Uppsala, Sweden, issuing pleasantries, the man he was insulting with his presence must have been turning in his grave.

While praising himself for the letter he himself had written to Mr. Hammarskjöld back in 1956 and telling everyone at the graveside how he had read it to his class, asking for freedom and democracy for the people of Hungary (whose armies just over a decade earlier had been slaughtering the heroic Soviet people as they fought steadfast against the evil hordes of Fascism), Ban Ki-Moon underlines quite what a vain, fickle and absurd figure he cuts.

Dag Hammarskjöld knew, when his aircraft flying from (now) Zambia to (now) DC Congo, started to crash, killing him and 15 others, that history would be his legacy, the pages he had written on the annals of peace-making efforts and his courage in finding solutions in his bold attempts at crisis management would sing songs praising him for many centuries to come.

As for Ban Ki-Moon, the history book will have him down as the weakest, most insignificant and inept non-entity ever to have insulted the UNO and the world community of nations due to his biased and totally ineffective stance on Libya, where the UNO passed the responsibility to that evil clique of war-mongerers and murderers, NATO and stood back while these war criminals unleashed hordes of marauding thugs on the good people of the Jamahiriya.

Ban Ki-Moon stood back while NATO lied and created yet another casus belli based upon sheer manipulation of the truth. Ban Ki-Moon stood back and watched in silence while NATO claimed that Colonel Gaddafy's forces had bombed civilians from the air, which was a blatant lie as now everyone knows. Ban Ki-Moon failed to point out that the one bombing civilians is NATO, he failed to refer to the use of Apache helicopter gunships against civilians, he failed to condemn the bombing of the Libyan water supply or the electricity grid "to break their backs".

Ban Ki-Moon has not once issued a word of condemnation against NATO's clear mission creep, in which "protecting civilians" has become taking sides in a conflict NATO itself started, in which NATO is cavorting with groups on its own proscribed list, in which the terrorists it has sent forth commit acts of murder, rape, destruction of property, arson, torture, looting..

Ban Ki-Moon has stood back and allowed it to happen, doing nothing whatsoever to ensure that the legacy of the UNO remains intact, to guarantee the inviolability of its Charter and to uphold the terms and conditions of all international agreements, not least those of the Geneva Conventions, all of which have been breached and violated very clearly by NATO's leaders.

Ban Ki-Moon is the human face of the UNO's failure to represent anything more than a humanitarian agency, a vapid monstrosity of goodwill but in concrete terms, a monument of pith and wind. Ban Ki-Moon's total and utter failure to stand up for what is right, to stand up for the freedom of a people to live within the Jamahiriya they so obviously love (and we are not speaking of the handful of terrorists, religious fanatics and mercenaries, NATO's torturers and rapists) is the mirror image of the death knell of the Institution he has not only failed to represent most miserably, but whose legacy his very existence as Secretary General insults to the core.

How dare he refer to himself in the same breath as Dag Hammarskjöld, under whose feet he is not even fit to squirm.

So it is better that Ban Ki-Moon reserves for himself an anonymous grave, without a tombstone, in some inhospitable part of Antarctica where he is forever out of sight and out of mind.