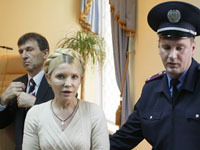 The conviction of Yulia Tymoshenko has become one of the most important topics for foreign media recently. Practically all Western publications say that the case of the former prime minister of Ukraine is politically motivated. Some reporters fear that Ukraine will make a large step away from Europe to become closer to Russia.

"Ms. Tymoshenko, a fiery Ukrainian nationalist who was narrowly defeated in presidential elections last year by pro-Russian leader Viktor Yanukovych, has been on trial since June on charges that she exceeded her powers and betrayed the interests of her country by signing a disadvantageous gas deal with Russian Prime Minister Vladimir Putin two years ago," The Christian Science Monitor wrote.

The publication is apparently unaware of the fact that the name of Ukraine's primary nationalist is Oleg Tyagnibok. He reproached Tymoshenko for being too "pro-Russian."

"The draconian seven-year prison sentence meted out to Tymoshenko will galvanize internal opponents of Mr. Yanukovych's increasingly authoritarian regime, wreck Ukraine's chances of signing a nearly-negotiated free trade agreement with European Union, and leave it little choice but to drift into a Moscow-led customs union, which will permanently link its economy with those of Belarus, Russia, and Kazakhstan," the newspaper wrote.

This is pure geopolitics. Tymoshenko is less pro-Russian than Yanukovych, which makes her a favorite of the West.

Britain's The Guardian has the same opinion about Tymoshenko's case. The British journalists did not mince their words about Yanukovych. For The Guardian, it is ok to distort facts.

"Voters had grown weary of the constant bickering between the country's two pro-western leaders - firebrand prime minister Yulia Tymoshenko and semi-romantic nationalist president Viktor Yushchenko. Instead, the man of the moment was Viktor Yanukovych, a Soviet-era apparatchik. Back in 2004, Yanukovych had been caught, embarrassingly, trying to fix the last presidential poll, " the publication said.

We have to remind our British colleagues that Yanukovych was not an apparatchik (functional bureaucrat) during the Soviet times.

"The decision by a Kiev court today to jail Tymoshenko for seven years for abuse of office over a controversial 2009 gas deal with Russia is an unambiguous signal. It says that Yanukovych does not really care what the EU thinks about him. It also confirms what Yanukovych's critics have been saying for some time - that under his leadership the country is sliding towards Russian-style "managed democracy" and autocratic rule, " the newspaper said.

However, The Guardian saw a "ray of light" in this story.

"Things may look grim for Tymoshenko, but there are several factors in her favour. Plus, Ukraine is more susceptible than Russia to international pressure...Next year, Ukraine, together with Poland, will host the European football championships, Uefa Euro 2012, with the final taking place in Kiev. It is a moment when the eyes of the world, or much of it, will be looking at Ukraine. And it won't look too good if Nelson Tymoshenko is still in jail, " the British newspaper concluded.

Here we go. They now compare Tymoshenko to Nelson Mandela, who was also jailed for 27 years by the Apartheid regime.

"The fate of the prime minister has become a serious test for the regime. After his election in January 2010, President Viktor Yanukovych took all control levels into his hands. The cases of persecution of opposition activists have become more frequent recently," the newspaper said.

The conviction of Yulia Tymoshenko proves that Ukraine's current legal system is all about settling political scores. It is worthy of note that the French journalists did not quote any opinion from Tymoshenko's adversaries.

Germany's Die Welt was also unhappy about the court decision.

"Ukraine is not a small country, and it is deciding in which direction to go - either towards Russia or Europe. Now the country has made a step towards Moscow. After the systematic restrictions of democracy and law-based state structure in Russia and Belarus, it seems that Ukraine is moving in the same direction too.  The country has come closer to "manipulative democracy," the newspaper regretfully said.

The German publication also said that the struggle for freedom is not over for Tymoshenko. The newspaper referred to "vague remarks" from Viktor Yanukovych, who said that the court decision was not final.

"This means only one thing. There will be further rounds in this struggle. However, the political administration in Kiev has brought itself to the dead end," the German paper said.

Like their US, British and French colleagues, the Germans did not even try to analyze the views of Tymoshenko's adversaries.

Austria's Der Standard tried to analyze Tymoshenko's case completely. The paper quoted Gerhard Mangott, a local specialist for Russia, who supported the tough position of the EU administration. At the same time, he urged the Europeans not to cease the talks with the Ukrainian administration. "If the EU refuses from the talks with Ukraine, it will weaken its positions towards Russia," the Austrian expert said.

So when they say - Ukraine, they keep Russia in mind.

The publication also quoted Tymoshenko's daughter Eugenia Karr and her companion Grigory Nemirya. "For those, who have been watching the process attentively, it becomes obvious that it does not meet international standards at all," Karr said. "Tymosheno is the leader of the opposition. She is a symbol of the democratic and European Ukraine," Nemirya added.

The word "pro-European" would fit the context better, though. The price-freezing policy, which Tymoshenko used to practice, has nothing to do with Europe.

Italy's Corriere Della Sera does not have any doubts about the political motive behind Tymoshenko's case. "There is not even a slight doubt about the political character of her conviction. Tymoshenko will not become competition to Yanukovych during the next presidential election," the newspaper said. However, Italian journalists are also concerned about geopolitics and the opportunity for Ukraine and Russia to become closer to each other.

"The court decision in Kiev will freeze the negotiations between Ukraine and the EU after many years of efforts and disappointments. Ukraine will feel disgusted by the West again. If Ukraine looks east after it breaks up with the European Union, Putin will obtain the pearl in the Customs Union of Russia, Belarus and Kazakhstan. Many Russians consider this pearl the cradle of their civilization," the newspaper said.

For some reason, the newspaper has for some reason forgotten that the Russian prime minister was not thrilled about Tymoshenko's conviction.

The tone of publications in the Western media is obvious. They are trying to defend her, they consider her case political. However, they are doing this just because Tymoshenko is less pro-Russian than Yanukovych. It is very important for the majority of European and American publications not to let Ukraine get closer to Russia. They do not even want to go into legal details of the case.