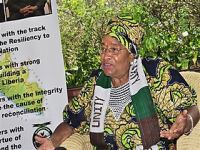 The most likely ex-President of Liberia has been given a share of one of the western world's most prestigious awards, the Nobel Peace Prize. Yet the residents of the capital, Monrovia, have not had running water for the full 6 years of her term in office.

Think about it, if after six years and hundreds of millions of dollars of western aid, the residents of the capital have no running water, how desperate must it be in the rest of Liberia?

Access to clean drinking water is the first of the fundamental human rights, including food, shelter and medical care, that make up the most primary of all human rights, the right to life itself.

Lack of clean drinking water has killed more people in Liberia, as a part of the world as a whole, than all the violence and wars combined.

The UN may only have recognized clean drinking water as a right last year, but for so many in the third world it is the most pressing daily need.

While western human rights corporations may preach oh so vociferously about human rights being elections and freedom of the press, they somehow neglect to rate the world's leaders by how well they are making sure all their people have the first of the basic human rights to life, clean drinking water.

It is little wonder why the Liberian President is so unpopular in Liberia? She has been an utter failure in the human rights department as far as her citizens are concerned, no matter how many Nobel prizes she may receive from her overlords in the west.

Again, think about it, how is a modern city supposed to function without running water? And this utter failure of an African leader got the most prestigious award the west bestows on its vassals?

As for the Liberian President's peace building credentials, it was just this year that Liberian based paramilitary death squads, armed and supported by the French, helped invade the Ivory Coast to overthrow the Gbagbo government, and in the process murdered untold thousands of Ivorians, with 800 massacred in just one town.

One hell of a peace builder wasn't she, but then it may be unfair to blame her for everything gone wrong in Liberia for many claim that she is little more than Mayor of Monrovia and its environs, that warlords, paramilitary militias and bandits actually control most of the country.

Crisis Management is the USA's preferred policy in Africa as in create a crisis and then manage the subsequent chaos, the better to loot and pillage west Africa's resources. Liberia has long been a poster child for murder and mayhem, though much hope had been placed in Africa's first "democratically elected woman President."

But after 6 years, after beaucoup millions of dollars and still no running water in the capital of the country, one should expect a Nobel prize, at least? For a job well done, yes as far as the western banksters, Firestone Rubber and their minions in the media are concerned.

So remember, it's a No-bel Prize for Liberia's President and No-water for Liberia's residents, all thanks to an unhealthy dose of western style "democracy."