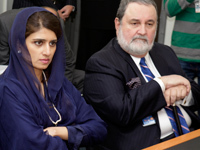 The conflict between the U.S. and Pakistan continues to evolve. Pakistani Foreign Minister Hina Rabbani Khar has provided a tough and undiplomatic answer to the senior US authorities, including her American counterpart, Secretary of State Hillary Clinton, who accused Islamabad of "pandering to terrorists" from the "Taliban." The head of Pakistan's foreign ministry, in fact, accused the U.S. intelligence agencies of committing a series of terrorist attacks against U.S. facilities in Afghanistan to write it off to Pakistan.

Earlier, the chairman of the Joint Chiefs of Staff, U.S. Admiral Mike Mullen, at a hearing in the Senate criticized Islamabad, accusing it of supporting Pakistan's "Haqqani" (ISI) that allegedly could have ordered the militants to attack the U.S. embassy in Kabul on September 13.

According to the senior military officer, "Haqqani" is "a direct continuation of the ISI." In addition, Washington virtually accused Islamabad of committing other attacks as well. Among them is a recent attack on a U.S. base in eastern Afghanistan where 77 soldiers were injured.

The U.S. Ambassador in Islamabad Cameron Munter said that Pakistan has become home to terrorists that the local authorities stay in contact with instead of fighting. Mullen openly accused Pakistan of exporting terrorism to Afghanistan and added other accusations of Islamabad to Mullen's speech. He said that he had strong evidence that this group was behind the attack at the hotel "Intercontinental "in Kabul on June 28 and was responsible for a number of small but efficient operations.

However, the high-ranking Americans provided no conclusive evidence in support of their words. This did not stop them from basing more serious charges on these allegations at the official level. On September 23, the head of the U.S. State Department stated that the Pakistani authorities have allowed the Islamists to take control of the country, and as a result the situation there became deadly for the global security.  According to Hillary Clinton, the Islamists continue to take control over an increasing number of territories. She considered this to be sufficient to call Pakistanis to take a tough stance against the irresponsible policies of their government.  The Head of the Department of State reported that the attention of U.S. President Barack Obama in fighting "extremists" was not confined to Afghanistan, and that this struggle extended to the fight with the Islamists, Taliban and Al Qaeda in Pakistan.  Despite a new wave of the financial crisis, Washington is ready to allocate billions of dollars to the cause.

Another alarming statement was made earlier by the Pentagon that the Americans were ready to independently eliminate "Haqqani" group on the Pakistani territory if it is not done by Islamabad.  The Pentagon chief Leon Panetta said that the US's patience is running out and they simply cannot allow the terrorists to quietly sneak into Afghanistan to attack the US forces and retreat to Pakistan to rest.

Hillary Clinton believes that the urgency of the situation in Pakistan should not be underestimated. She does not rule out that "terrorist groups" may be able to overthrow the Pakistani government.

Such statements are a continuation of a series of anti-Pakistani statements of the American politicians that became more frequent after the events of May 1-2, the alleged liquidation of Osama bin Laden in Pakistan. The Foreign Minister of Pakistan Hina Rabbani Khar not only accused her American counterpart of a lie, but openly declared that the United States that created "Haqqani" some time ago is supporting terrorism.

According to the head of Pakistan's foreign ministry, she meant the intrigues of the CIA directed against Islamabad, and the fact that the Americans have never provided evidence of cooperation of ISI with militants. Hina Rabbani Khar is convinced that these actions increasingly more often affect the territory of Pakistan. The head of the Pakistani Ministry of Foreign Affairs Hina Rabbani Khar has threatened to break the alliance with the U.S. that is trying to eliminate their allies. This would include military cooperation with the U.S. She warned Washington against making Pakistan an outlaw, or else they would have to answer for their choice.

However, it is too early to speak about a complete breakup. The U.S. Central Command chief Gen. James Mattis have arrived in Islamabad for talks with the commanders of the armed forces of Pakistan. Yet the harsh statements made by the U.S. Secretary of State Hillary Clinton are clearly not conducive to a constructive dialogue. It is difficult to come to an agreement in the context of the information warfare, and the visit of James Mattis can be viewed as a "black mark" for Pakistan.

The "security forces" supported the statements of the Pakistani Foreign Ministry. The Army Chief of Staff General Ashfaq Parvez Kayani said that disengagement from Pakistan, first of all, is unfair, and, second, is unproductive. The Minister of Internal Affairs of Pakistan Rehman Malik warned the U.S. that Islamabad will not allow them to conduct operations on its territory. He said that the people of Pakistan would never allow their shoes to walk on their land.

This means that the issue of providing the next tranche of U.S. assistance in the amount of one billion dollars to fight terrorism is in question. The Americans will set conditions for its allocation that would be clearly unrealistic for Pakistan. What does it mean to provide the territory for the U.S. military operations when there is a significant increase in anti-American sentiment in the country?

This was partially caused by the strikes of the American UAV in Pakistan that killed hundreds and hundreds of residents. If the official Islamabad gives a green light for the operation, the opposition will immediately accuse the government of betrayal. Then we cannot rule out an open rebellion in the country, not limited to its north-eastern part.

Pakistani Prime Minister Syed Yousuf Raza Gilani once made an astute observation that the U.S. cannot live with them, but cannot live without them either. However, the United States interprets this statement in two ways. If Washington is really going to limit itself to carrying out punitive operations in Pakistan against the forces supporting the Afghan mujahedeen, it can be seen as a folly that could bring down the current secular government. However, we cannot rule out the fact that the Americans deliberately provoke a fight with far-reaching intentions.  Pakistan today is the only Muslim country with nuclear weapons. And under the pretext of fighting terrorists, this arsenal could be destroyed. The Pentagon has already developed several options for such a development, implying, in particular, unexpected precision air strikes and special forces operations.

There is another important point. Pakistan is not that scared of being left without the American financial assistance. Now, in response to the rapid development of its relations with China, the U.S. factor is losing its former influence. This, in turn, cannot but scare Washington. Back in May of 2011 there was information that Islamabad was ready to provide to the Chinese Navy a base on its territory. The appearance of the ships of the "red" in the immediate vicinity of the Persian Gulf area that is considered to be the area of the U.S.'s strategic interests is a nightmare for the Americans. To prevent this, the U.S. can implement the scenario with an attempt of a controlled collapse of Pakistan into a number of small states preceded by the destruction of its nuclear arsenal.