Professor Wangari Maathai passed on last Sunday aged 71. Her stay with us leaves a tremendous legacy of 45 million trees, the Green Belt Movement, great strides towards women's empowerment, the reduction of poverty and access to potable water, making her a true heroine of humanity, whose memory will remain with Africa and with the world for eternity. 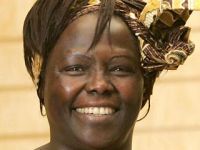 Wangari Maathai was born in 1940 in the Nyeri District in Kenya's Central Highlands. She was educated in Kenya and the USA and was the first woman in central/eastern Africa to receive a doctorate degree - from the University of Nairobi - in 1971. In 2002 she was elected to the Kenyan Parliament and rose to the position of Assistant Minister for the Environment and Natural Resources.

Professor Wangari Maathai leaves her mark among us as one of those enlightened human beings whose extreme intelligence, organizational capacity and tremendous drive was matched with a simple, humble and very warm approach to life and that non-intrusive way of being with fellow human beings which celebrates the noble of spirit.

Her legacy is tremendous: A Nobel Peace Prize Laureate, environmental campaigner, campaigner against poverty, campaigner for women's rights, for the empowerment of women and campaigner for access to clean drinking water...the result is equally staggering: she was the founder of the Green Belt Movement in Kenya through which women in rural communities planted trees to increase their quality of life. By establishing tree nurseries and plantations, these women insured greater access to drinking water (as the trees created ecosystems which retained water in the soil, also combating deforestation) and also provided themselves with more firewood for cooking. She was the first African woman and the first environmentalist to win the Nobel peace Prize (2004).

Since it was established, the Green Belt Movement has been responsible for the planting of around 45 million trees in Africa and has assisted 900,000 women to create tree nurseries. Ms. Maathai was a patron of the UN Environment Programme (UNEP) and was the inspiration behind the UNEP's Billion Tree Campaign, which encourages people across the world to plant trees for the benefit of their communities.

Remembering her for her life-long commitment to environmental sustainability and the empowerment of women, the following were among the many accolades she received:

"Her passing is a loss for the people of Kenya and the world... a globally recognized champion for human rights and women's empowerment" and a "pioneer in articulating the links between human rights, poverty, environmental protection and security." UN Secretary-General Ban Ki-moon.

"She was a visionary who saw over the tree canopy, but never lost sight of the roots," Jan McAlpine, Director of the Secretariat of the UN Forum on Forests.

"Wangari Maathai was a force of nature...While others deployed their power and life force to damage, degrade and extract short term profit from the environment, she used hers to stand in their way, mobilize communities and to argue for conservation and sustainable development over destruction. She was, like the acacias and the Prunus Africana trees Wangari fought so nobly and assiduously to conserve, strong in character and able to survive sometimes the harshest of conditions,"  UNEP Executive Director Achim Steiner.