UN asks for tolerance and then sides with racists 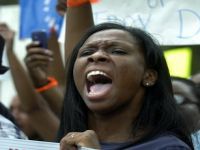 The 2001 UN World Conference Against Racism, Racial Discrimination, Xenophobia and Related Intolerance took place in Durban, South Africa, in 2001. Ten years later, the UN supports what is clearly a racist and intolerant force - the NTC in Libya; the African Union recognises this scourge which fights against the man championing this Organization.

After this, the words of UN Secretary-General Ban Ki-Moon fall on deaf ears. Telling the General Assembly on the tenth anniversary of the Durban Declaration "The resurgence and persistence of such inhumane attitudes and detrimental practices indicate that we have not done enough to stem the tide," it seems he is forgetting something.

What he is forgetting is the recent move towards the NTC in Libya and away from the same country's Jamahiriya Government, led by Brother Leader Muammar al-Qathafi. Muammar al-Qathafi was to receive a humanitarian prize from the UNO in March 2011 for his excellent humanitarian record. Why then did the UNO cancel this (the "casus belli" was based upon false flag events, as any simpleton today knows) and why does the UNO now, in general terms, back the NTC and not the Jamahiriya, given the racist and intolerant nature of Jibril and his evil minions and the inclusive non-racist approach by the Government of the Jamahiriya?

We have evidence of the NTC's crimes: torching black people in the street, gang rapes of black women, declarations that Libya should be ethnically cleansed... so we see once and for all that the UNO is not worth the paper its Charter is written on. It cannot uphold its Charter (violated by NATO), it cannot uphold international law (it picks and chooses the nations to be held responsible for breaching the UNSC Resolutions), it is unable or unwilling to try personnel from the chosen few (NATO) countries for their crimes in UN courts and the Geneva Conventions are broken ad nauseam by NATO without any reaction.

So the UNO is useful for what? As a humanitarian agency, yes. As a law-making and law-protecting organism, sorry, it has lost its legitimacy.

That the UNO speaks of racism and tolerance today, is an insult to the millions of people who were victims of the African Holocaust, slavery. The way forward is not to insult through cowardice, it is to stand up to NATO and say No! Imperialist massacres belong to the 19th century.