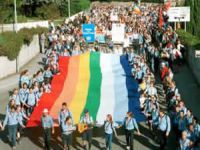 In the manifesto of the convening "Peace March" are contained generic appeals against wars, violence, trading weapons and to "put an end to the wars in Libya, Afghanistan," etc..

WHERE WERE YOU IN THESE 6 MONTHS?

Were you looking the other way?

Small groups like ours have attempted to raise public awareness with a series of events ignored by the press. We demonstrated outside the French Embassy and in front of Deputies there

We visited the embassies of the belligerent countries (China, Russia, India, Brazil, South Africa, etc..) Asking to promote an immediate ceasefire and to mediate between the parties under the aegis of neutral organizations such as the African Union or South American countries.

Through the press, we invited everyone to participate in these actions to raise awareness, but we always found ourselves wondering. Where were you?

What initiatives to stop the war have you taken?

Do you not realize that the aggressor countries (USA, France, Great Britain, Italy, NATO, Arab reactionary monarchies such as Qatar and Emirates) were violating the spirit and letter of the UN resolution speaking of an alleged act of "civilian protection" instead of their true objective of regime change by force of arms?

Do you not realize that the insurgents were constantly supplied with weapons, military and logistical support and entirely not willing to join any sort of negotiations?

Do you not see that the only purpose of this operation is the sharing of stolen Libyan resources in a neo-colonial context?

Why do you not have a word of condemnation on the bombings and military actions of the aggressors?

The only word of explicit condemnation you have turned against another country, Syria, where the government has opened a dialogue with the opposition more responsibly.

But even in this case, as in Libya, fringes of Al-Qaeda, radical Islamic fundamentalists and Afghanistan veterans are provided with weapons, and stirred up by the U.S., France, Britain and the reactionary Arab monarchies (Saudi Arabia head) to destabilize the government by refusing any dialogue.

Maybe you want to use NATO bombers for the next target?

Please note that all previous wars and aggression were preceded by blatant lies: weapons of mass destruction, Saddam's massacre, 10,000 civilians never happened with Libya with false images of mass graves and justified with the rhetoric of "human rights" violated.

THE RESULT IS THAT THE MORAL AND MATERIAL ONDITIONS OF CIVILIANS IN IRAQ, SOMALIA, AFGHANISTAN, KOSOVO, AND TODAY LIBYA: ARE THEY IMPROVED AFTER THE ARMED WESTERN "HUMANITARIAN" INTERVENTIONS?

THE ONLY RESULTS ARE MILLIONS OF DEATHS AND REFUGEES, CIVIL WAR, HUMANITARIAN DISASTER, THE COLLAPSE OF ALL LIVING CONDITIONS.

And now the people of the Libyan cities of Sirte, Bani Walid and Sabha are in danger of being massacred by the rebels, under the aegis of an approved UN operation "to protect civilians" and your silence gives consent and support.

Under these conditions the "peace march" becomes a whited sepulcher.

These are the reasons we do not adhere to the march as associations. Rituals and institutional initiatives we do not endorse, but we will continue with our concrete actions in favor of a ceasefire and a dialogue between the parties in Libya, as in Syria.