Washington destroys all peace initiatives for Palestine and Israel 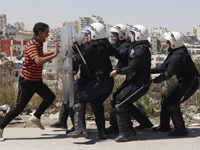 Many Western and Israeli experts stated that Mahmoud Abbas's intention to bid for the UN membership for Palestine was a "Palestinian provocation."

The Palestinian authorities believe that Israel will no longer be able to conduct military operations in the West Bank of Jordan and in the Gaza Strip after the international community recognizes Palestinian independence.

Israel, a US ally, believes that Abbas's claims contradict to previous agreements and UN resolutions. The Palestinian administration claim that the establishment of a separate Arab state in Palestine is an inalienable part of international agreements. According to Palestinian officials, it is about time these plans should be turned into reality.

Palestine does not hold many chances to become the 194th member of the international organization. Abbas says, though, that over 150 countries will approve the bid. However, the USA promises to veto the recognition at the UN Security Council.

What motives does Israel have? Israeli officials say that the Palestinian state is not viable per se, not even financially. Palestine's annual budget makes up $3.7 billion. Foreign sponsors - Western states and Japan - allocate all of this amount.

If Abbas eventually bids for the UN membership, the USA will deprive the nation of annual grants worth $400 million. This is not a serious obstacle, though. Arab and Muslim countries have already announced their intention to fill this gap in the Palestinian budget. Saudi Arabia will assign $200 million extra, Kuwait - $50 million, etc. Iran also provides considerable assistance to Palestine.

Israel does not wish to have a UN-protected neighbor which does not recognize Israel. Israeli officials also claim that Palestine's decision does not even correspond to the protocol of submitting such bids to the UN. A country is supposed to submit a letter to the UN Secretary General, in which it must set out respect to the UN Charter and convince other members of its peacefulness. Western analysts wonder whether Palestinian radical organizations can be referred to as peaceful if they attack Israel regularly.

Representatives of Arab states claim that it is Israel that serves the primary source of tension in the region. According to them, Israel has unleashed a series of wars against its neighbors. Palestine's powerlessness can only beget additional aggressive sentiments of Zionists, they say.

Who is right in this situation? Pravda.Ru asked this question to Sergei Demidenko, an expert of the Institute of Strategic Estimations and Analysis.

"From the legal point of view, the USA and Israel are absolutely wrong. There is a great deal of international agreements about the establishment of a separate Arab state in Palestine. Washington recognized those agreements, by the way.

"In practice, it is extremely complicated to establish an independent Palestinian state. Tel Aviv is right when it says that the borders of the new state have not been determined. If so, no one can guarantee security for Israel. In addition, administration agencies in Palestine perform their functions poorly to say the least. It is practically impossible to negotiate anything with Palestine against such a background. To crown it all, Israel complains of "extremists" in the Gaza Strip - Hamas. Abbas is perfectly aware of the fact that his bid will fail. Nevertheless, he continues to promote it actively. He is doing that to improve his reputation among the Palestinians: "See how we care about you?"

The political situation in Palestine is extremely hard. There is no unity in the country; corruption is everywhere. As a matter of fact, Abbas is not a legitimate leader - Hamas can destroy him very quickly. The USA suggests resuming negotiations, which proves the weakness of the international community to solve the problem. For some reason, America does not use its opportunities to put pressure on Israel, which refuses to cease the construction of settlements on the West Bank of Jordan and in Eastern Jerusalem - the land that was occupied after the war of 1967. The Palestinians claim that this land belongs to them according to previous international agreements.

"The USA has more than enough opportunities to put pressure on Israel. It would be enough to say that the prospect of losing defense and financial support could make Tel Aviv much more agreeable. However, Washington did not even try to put any pressure on its ally.

The current situation is a litmus test for the US-Israeli relations. Bill Clinton has recently cracked down on Obama for his pro-Israeli course, which affects the relations with Arab countries.

Obama said that the USA's "road map" stipulated the principle of equal approach to all sides. However, it is clear that Israel is still an unsinkable giant for America. It is Washington's pro-Israel position that sends all peace initiatives into the wastebasket.