Mexico still looking for its own self on fields of cannabis 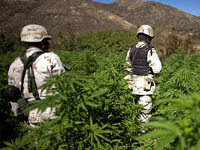 On September 16 Mexico celebrated its Independence Day. Surprisingly, the country with the second largest populated in Latin America gives nearly no reasons to talk about its foreign policy. The names of its presidents are known only to a small circle of specialists in the Spanish-speaking countries. Meanwhile, this situation, considering the country's rich history and vast potential, seems unnatural.  Recently, former President Vicente Fox in an interview with the Argentine media commented on the situation in the Western Hemisphere. In his view, radical opponents of the United States from Venezuela (Hugo Chavez), Bolivia (Morales), Nicaragua (Daniel Ortega) and Ecuador (Rafael Correa) are leading their countries to a standstill. Fox explained that you cannot endlessly hand out money right and left, taking it from the business and becoming dictators like Castro brothers in Cuba.

Fox also criticized the great northern neighbor - the United States. According to him, Barack Obama is wrong in choosing continuous increase of budget expenditures. However, the former Mexican leader praised the center-right government of his native Mexico and Chile, as well as the moderate center-left leaders of Brazil and Argentina. However, Fox, much like his successor, current President Felipe Calderon, has not suggested any ideas on the development of the region.

Such passive behavior of 113-million strong Mexico in the international arena is simply amazing. The population of Venezuela is four times smaller, Cuba's - ten times smaller, and Nicaragua - twenty times. However, the names of Hugo Chávez, the Castro brothers, and Daniel Ortega are known around the world. Former Brazilian President Luiz Inacio "Lula" da Silva began to gradually turn his country into a regional leader and even tried to help resolve the crisis over Iran's nuclear program. Argentine President Cristina Kirchner also often gave reasons for discussions. This is not the same for the Mexicans.

Is it no wonder that many Mexican politicians suffer from lack of attention of the world community. To deal with this state of affairs, last year a bill was introduced by the country's parliament to change the name of the country. It was suggested to replace the name "United Mexican States" to simply "Mexico." They said there was only one United States. No one thinks about Mexico hearing this phrase. Incidentally, once the current President Felipe Calderon was fond of this idea.

There is nothing to add. Mexico rarely makes political news without a reference to the "true" United States. Mostly it is mentioned in connection with two topics. The first of them is hundreds of thousands of Mexican migrant workers who try to settle in the United States, and the second - drug trafficking from Mexico that originates mainly in Colombia and other South American countrie.

As a result, in 2007 the administration of George W. Bush chose a rare measure in the contemporary world. A so-called security wall was installed on the border with Mexico. Calderon was offended by such a gesture. "The United States has increasingly more discussions that the migrants from Mexico cause economic and social problems, and pose a threat to the security of the country," he said. Calderon added that the U.S. disdain for Mexicans often turns into hatred at the everyday level both towards the people and Mexico as a whole.

However, all this is just talks. During the years of their reign, both Calderon and Vicente Fox did little to stop their compatriots from traveling to the north. As a result, Mexican migrant workers working in the U.S. transfer over a billion dollars to their homeland, and before the crisis, this figure was doubled. 30 percent of Mexico's GDP is selling oil to the United States. Americans allocate to the southern neighbor approximately $300 million to combat drug trafficking. Where then is independence in foreign policy?

Objectively Mexico has everything to become one of the leaders of Latin America and not depend so greatly on the U.S. market and American handouts. The country is among the top three oil exporters in the world (along with Norway and Russia). Annually the country is visited by millions of tourists who come to see the treasures of the ancient Mayan and Aztec civilizations. Their empire spread from the Pacific to the Caribbean Sea in the days when the U.S. was not even in existence, and the Spaniards tried to oust the Arabs from the Iberian Peninsula.

In practice, Mexican army and police are conducting a large-scale fight with the drug barons who have created their own fighting units and control a large part of the country. Former President Fox seems to be desperate. He openly invites to legalize certain drugs and sign a truce with some "less roofless" drug cartels. According to him, for drug lords, who have a net profit of $50 billion worth, it is very easy to bribe police and government officials.

Unlike his predecessor, the current President Calderon is not in a hurry to sign a truce with the drug cartels. However, his recent televised address that marked his fifth anniversary in office was made in a pleading tone. He said that the country was flooded with violence caused by drug traffickers' omnipotence, but the citizens remain indifferent to what is happening. He stated a sad figure: for the years of the Calderon bandits killed 48 thousand people.

It is not surprising that in the conditions of chaos on their own territory 113-million strong Mexico is not a prominent player in the political field. Mexican leaders currently have nothing to offer to Latin American counterparts, in contrast to, say, Brazil, Argentina, Chile, or even small but stable Costa Rica and Uruguay. If the war with drug lords is won, Mexican stocks will jump up immediately. However, prior to becoming a player it will have to leave the shadow of its northern neighbor. Many Latin American countries were successful in this move.