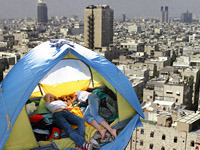 The demonstrators, who took to the streets to set out their protests against high real estate prices in Israel, set a new record. The "March of the Million" gathered from 350 to 500 thousand people. This is a very impressive number for the country with the seven-million-strong population.

Many participants of the "tent revolution" rejected any political slogans, but it could be seen that the Israelis get more and more dissatisfied with the actions of Netanyahu's government.

One of the key slogans in the demonstration was: "The people demand social justice." The "March of the Million" was held in Kikar Hamedina Square in Tel Aviv, on which the city's most expensive restaurants and boutiques are situated.

The demonstration in Tel Aviv became the largest in the country, with up to 300,000 people participating. The slogans that the demonstrators were carrying reflected the people's concerns about the considerable gap between the poor and the rich: "The country of milk and honey which is not for everybody", "Generation is thirsty for future".

During the first stage of the "tent revolution", the people were demanding a reduction in real estate prices. Afterwards, the people began to shout the slogans reflecting social, national and even personal problems. The local media paid attention to the fact that Israeli Arabs also took part in the "March of the Million." They demand full-fledged participation in the public, political and economic life of the country.

The events of the recent two weeks showed that the attacks on Israeli cities from the Gaza Strip, even during the cessation of arms, can continue. The residents of such town as Sderot, Nagaria and Kiryat Shmona traditionally have more questions to the authorities because of missile attacks. Therefore, those people have their own reasons to be a part of the "March of the Million."

The Israeli government shows no reaction to the protests and continues to take pre-planned measures to overcome the social crisis. Prime Minister Netanyahu announced the beginning of economic reforms soon after mass demonstrations spread across the whole country in days.

To replenish the budget, the Israeli government plans to raise the tax on companies by 1% in 2012. In addition, taxes will be raised for those, whose salaries exceed the level of 70,000 shekels.

Many protesters do not believe that the government of Benjamin Netanyahu will be able to do something to overcome the crisis. For the time being, there is no dialogue between the protesters and the authorities.

The demonstrations in Israel are peaceful, there were no conflicts registered. A clash with police occurred on Tel Aviv's Rothschild Boulevard after the municipal authorities decided to clear the tent camp.

The situation in the country now depends on whether the government restructures the budget to meet the protesters' requirements. The cabinet of ministers will have to make a tough choice. The security problem, which implies the permanent increase of defense spending, has not been solved.

The "March of the Million" has not materialized: only 400,000 people took part in the demonstrations. Many activists of the "tent movement" decided to take a break.

However, it is absolutely obvious that no matter what measures the government may take, the prices on real estate and food will remain the way they are now. The construction of public welfare homes is not a question that can be settled in one day. Therefore, the economic realities of present-day Israel will push the nation's middle classes towards new demonstrations.

Netanyahu's government is not going to step down, though. If demonstrations continue to be peaceful, the government will keep the power in the country. The main difference between the popular unrest in Israel and the Arab revolutions is simple. The people, who took to the streets of Tel Aviv and Haifa, are neither impoverished nor desperate. Quite on the contrary, they represent the comfortably off middle class.