The Hague: Anti-Serbian show must go on 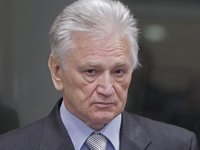 The Hague Tribunal has sentenced another Serb. This time it was a former chief of staff of the Army of Yugoslavia Momcilo Perisic, sentenced to 27 years in prison. Ironically, he would have been imprisoned at home, too. In Serbia, he faces a sentence for spying for the United States and NATO.

Perisic is the most senior officer of the Yugoslav army caught by the Hague prison. From 1993 to 1998 he headed the General Staff of the Army of the Federal Republic of Yugoslavia (JNA). He was charged with war crimes in Croatia and Bosnia and Herzegovina, including murder, attacks on civilians and some "inhumane acts". All this, according to the prosecution, was done with the support of the local Serbs provided in 1993-1995 by the president of Serbia and Yugoslavia Slobodan Milosevic.

One of the main accusations is a rocket attack on the capital of Croatia Zagreb in May of 1995, which resulted in deaths and injuries. However, the prosecution did not disclose what preceded the attack. At that time the Croatian army carried out "Operation Lightning" that became the first step in destroying the self-proclaimed Republic of Serbian Krajina. During the operation atrocities ensued against the civilian Serbian population, and shelling of Zagreb was a response to the operation.

Another charge is for aiding and abetting sniper fire in Sarajevo in the period from August 1993 to November 1995 that have claimed several hundred people. The prosecution claims that Perisic was guilty of not punishing those responsible for these shootings. Here is another issue: in the beginning of 1990 Sarajevo was home to 200 thousand Serbs, and their neighborhoods and villages were shelled by Muslims. That was the response to the shooting by the Muslims of the colony of Yugoslav People's Army in May 1992 in Sarajevo. All these events preceded those Perisic is accused of.

Finally, another charge is for the tragic events in the Bosnian town of Srebrenica, where eight thousand Muslims are believed to have been killed by the Serbs. These are the main charges against Bosnian Serb leaders Radovan Karadzic and Ratko Mladic. Allegedly, Perisic did nothing to prevent the crimes against humanity and stop a group of Serbs that already is serving a sentence on the charges of the Hague tribunal.

There are questions here as well. How is it that Srebrenica was a Muslim "enclave" although until 1992 more than a quarter of the population were Serbs? And how should have the commander responded to the Muslims carrying out regular forays in the direction of Serb positions under the guise of "blue helmets"? The Serbs took very long to respond so as not to violate the UN resolutions. However, in the end the source of constant threat was eliminated.

The prosecution emphasized that Perisic helped Croatian and Bosnian Serbs secretly in order to hide the role of the Federal Republic of Yugoslavia in the conflict. Meanwhile, Croatia, the Bosnian Muslims and Croats received military support bypassing the international embargo. The support was (quite openly) provided by the USA and Germany. Therefore, even the particularly "aggravating" charge does not hold water.

There is another question that summarizes all the charges: how, in practice, Perisic, who was staying on duty in Belgrade, could monitor what was happening hundreds of kilometers away in the other states? And how could he do something to prevent it, if the army of Croatian and Bosnian Serbs did not obey him? Since 1994, Belgrade completely stopped supporting its own people. This is a murky story. It is not surprising that Perisic denied all the charges, without exception.

The claims against General Perisic look all the more strange if we consider his biography after 1995. Initially, he supported Milosevic, but joined the opposition and played a significant role in the fact that the president of the FRY was defeated in the 2000 elections. Moreover, in already democratic Serbia the General was accused of conveying military secrets to an American diplomat. His trial at home was postponed in anticipation of today's verdict. Apparently, Perisic would be sentenced in any case.

One way or another, he was tried at The Hague. Perisic voluntarily surrendered to the local Themis in 2005. He spent three years in jail in anticipation of the process and nearly as much - in anticipation of the sentence. Now, the 67-year-old General will most likely spend the rest of his life behind the bars.

Again, the Hague tribunal does not look its best. It looks like they locked away their own man who was willing to share his secrets with the U.S. However, this sometimes happens too. Croatian General Ante Gotovina who led the operation to crush the Serbian Krajina was sentenced to 24 years in prison. While he was a senior, he still was an executor. The political leaders of Croatia and, especially, their western backers have never appeared in court, in contrast to the Serbian ones.

Considering the essence of the charges, the verdict for the general is rather dubious - especially given that no one answered for far greater sins. However, we have long been accustomed to such decisions of the Hague court. We are equally used to the fact that the Serbs are tried disproportionately more often than others and they are the only ones sentenced to the terms similar to the one that Perisic was sentenced to.