Let us not forget Ethiopia 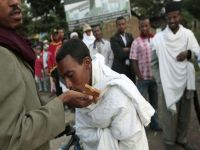 While Cameron's British government appeals to its population for voluntary funding to help the Horn of Africa, while it wastes millions of pounds a week bombing and murdering children in Libya, hundreds of thousands of people are facing the most desperate plight in Ethiopia, where a food crisis is exacerbated by refugees fleeing armed struggles.

Those who are facing the brunt of it are mainly children, who make up eighty per cent of the 121,000 refugees in the four camps in the Dollo Ado area (SE Ethiopia). In the Kobe camp, 88.6% of the 25,000 refugees are children - many of them orphans - and many of them are put up for sale. The main reason why is because in Somalia, the men stay behind in the villages protecting what they have and defending their livestock, while the women and children walk to the refugee camps inside Ethiopia looking for food. Men are also press-ganged by marauding armed bands if they are caught. In female-led families with many children, if the mother dies, her sons and daughters become orphans.

Adrian Edwards, a spokesperson for UNHCR, told reporters in Geneva that "We remain concerned about the high mortality rates due to severe acute malnutrition and diseases. Also worrying is the number of separated or unaccompanied children."

"Some families simply have no means for everyone to travel together, so women and children are sent first. However, over the past few weeks our staff have observed that there are more single men arriving from Somalia to join their families," he added.

The current crisis is the worst drought the Horn of Africa has suffered in six decades and it is further exacerbated by the armed conflict ongoing in neighbouring countries Somalia to the east and Sudan to the west - worsened again by a sharp increase in food prices of around 50%.

The conflicts in the Blue Nile State and in Southern Kordofan in Sudan have affected food supplies to populations at risk and has caused further waves of refugees to cross the border.

However, there is a further underlying cause for this crisis, and that is the corruption and mismanagement by the Ethiopian government itself - why did Ethiopia export ten thousand tonnes of rice to Saudi Arabia in 2010 and leave nothing in its food bank for emergencies?

Once again, the people of the world are caught up in the nightmares made by the people supposedly leading them: Cameron and his western chums have created a humanitarian crisis in Libya which will cost their taxpayers millions and in the case of their countries being prosecuted and forced to pay damages for the wanton destruction their acts of terrorism have meted out - billions; there is fighting over resources in Sudan, fighting over ideals in Somalia and then mismanagement...while the orphans in Ethiopia are sold into God alone knows what.

With leaders like these, isn't it time for the people of the world to have a say? That was precisely where the Jamahiriya Government of Libya stood, before it was so rudely interrupted.