The West may invade Syria to search for chemical weapons 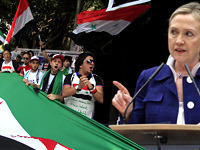 In the midst of the tragic events in Libya, the situation in Syria is faded into the background. Currently the western elite admits that "the progress of democracy in Libya" opens a wide path to putting pressure on the regime of Bashar Assad.

So far the situation is not that bad for Syria. First, despite the peculiar attitude of Russia to the Syrian events, the West could not get carte blanche to deal with Assad. In the first half of August, Russia allowed two statements of the UN Security Council condemning the actions of the Syrian leadership. However, they did not have legal force and the West has failed to impose international sanctions.

Second, Bashar al-Assad is at the top. The Arabs, particularly those who are not Syrians, used to be not of the highest opinion of him. They did not expect miracles from a man in civilian clothes educated as an ophthalmologist, who by some misunderstanding got the power in one of the key countries in the Arab world.

However, as it often happens, this impression was deceptive. Bashar al-Assad was prepared to devote his life to medicine, but the fate decreed otherwise. The elder brother of Bashar Basel was to be the successor of the former ruler Hafez al-Assad.

He had a strong personality without a doubt. One example is his relentless fight against the smuggling of cars covered by some very prominent members of the Syrian leadership. In practice, he ordered to have dozens of smuggled cars seized at the border with Lebanon simply crushed by tanks.

It is a popular belief in Syria that this fact led to his death, and few Syrians believe in the simple fact that he crashed his car in an accident. However, it was the tragic death of his brother that abruptly changed the life of Bashar Assad who was forced to give up his favorite thing and plunge into politics that he was a stranger to.

His father left him the country with a tangle of internal and external problems. One of the primary issues was the long overdue need to modernize the state that was hindered by his father's social circle. Despite the significant progress in Syria, associated with albeit slow, but still observable economic liberalization, the country still was not quite ready for today's endurance test. Bashar al-Assad, whom many in the West differentiated from the elderly Arab rulers who always wore military uniforms, came under a strong attack from the West.

Here and there, in various parts of the country, one after the other armed uprisings broke out. The Western media have unleashed information terror against Bashar Assad for the "bloody suppression of the Syrian revolution," although the tone of the summer protests was overtly dictated by extremist and terrorist elements.

As Pravda.ru reported earlier, the current Syrian president was suggested to resign from his post on favorable terms, threatened otherwise by the Hague Tribunal, and even military intervention (as in the case of Turkey). However, the "ophthalmologist" prepared a surprise. Those analysts who believed that one of the youngest presidents of our time would give up have miscalculated. Many considered him a really inexperienced ruler who, when left without an explicit intercession on the part of Moscow, will be forced to capitulate.

However, Assad Jr., apparently, was a worthy successor to his father nicknamed the Lion. During nearly six months of confrontation he did not make any strategic errors that would have allowed the West to isolate him. The main thing is that he has successfully withstood the endurance test, "a test of Hama." Mutiny in the city organized through the efforts of foreign intelligence services and Saudi funds threatened the existence of not only the current regime in Damascus, but the entire country of Syria.

The foreign masterminds "of the Syrian democracy," understood that Bashar Assad should suppress the riots in Hama. Not without reason the U.S. and French ambassadors came to support the insurgency, calling the local "Muslim brothers" to follow "North African" example.

Moreover, this scenario was considered a win-win: If the Syrian president would fold, then Syria could be written off. The emergence of "Syrian Benghazi" in the face of alternative power in Hama offered great opportunities for further anti-Syrian actions.

However, they could ignore other scenarios tested in 1982 with the elder Assad. During the liquidation of the February revolt in Hama, according to different data, from 10 to 40 thousand people were killed. At the time the suppression of the rebellion was conducted by one of the relatives of the Syrian president at the time, but he was less than elegant with his military operations, which explains the great number of victims.

The West did not rule out that this scenario will be repeated 30 years later. However, in case of repetition of these events, Bashar al-Assad would be in line with the bloodiest dictators in history. In 1982, Hafez al-Assad was backed by the USSR, and now his son has no such protectors. The West was hoping that in this scenario even Russia and China could not ignore the events and would just have to condemn the Syrian leader.

However, neither scenario worked so far. The West obviously was too quick to demonize President Assad and deprive him of legitimacy. The blood shed through the efforts of Western and Saudi intelligence agencies in Syria was not enough to make Bashar Assad if not another Saddam Hussein, then at least al-Gaddafi.

The order in Hama was restored with relatively little blood (maximum and clearly exaggerated number of the victims in Hama is 150). The young president made his bet on conducting a sophisticated operation that deserves a separate article.

The Syrian security forces carried out their tasks not in the way the West wanted them to, and the latter is now forced to change tactics. Of course, nobody is going to abandon the attempts to destabilize Syria and support subversive elements.

However, because Assad proved to be tough and did not succumb to threats of military intervention, economic measures were employed as well.

The tone is set by the United States that decided to deprive Syria of foreign exchange earnings from oil and gas. In the coming days the European Union is going to do the same. Italy that asked to postpone the introduction of oil and gas embargo against Damascus until November 2011 is opposed to the measures, hoping to find alternative source of hydrocarbons supplies by that time. However, no immediate effect of oil and gas embargo should be expected. Syria enjoys tangible support of Tehran that in any case would not allow the economic collapse of its key ally.

This gives the rise to the parallel "Iraqi scenario" against Damascus. Allegedly, Bashar Assad has huge stockpiles of chemical weapons at his disposal and there is a threat that he may lose control over it in the event of mass protests. Therefore, there is a need to get him to renounce the possession of the chemical arsenal.

At the last briefing, State Department spokeswoman Victoria Newland stated that Syria had a stockpile of paralytic and mustard gas. She added that working closely with the associates they would continue to ensure that these weapons do not fall into inappropriate hands.

Naturally, the West is not going to believe the assurances from Damascus that there are no toxic substances in its possession. The main thing is to make the world believe the danger coming from Syria and under this pretext enhance hostile actions. This includes ignoring the opinion of the UN Security Council, the organization that has lost all credibility back in 1999, during the aggression against Yugoslavia.