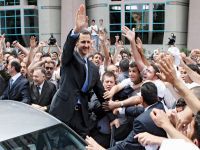 The forces of evil have been unleashed, a tsunami of Satanic hordes representing the corporate elitists which dictate western policies, a clique which hides behind the politicians it manipulates, for whom the media lies and for whom NATO arms terrorists and commits war crimes if necessary. Next stop, Syria. Guess who is at the end of the line?

Syrian President Bashar al-Assad was caught grinning and sniggering during the address of Muammar al-Qathafi to the Arab League in Damascus in 2008, when he predicted, not three years before Washington unleashed its Satanic Forces against his Jamahiriya, that Libya or Syria could be next. Bashar Al-Assad will be grinning from the other side of his face now, the difference being that there is an international Jamahiriya movement to continue the Colonel's work, while Assad's legacy is precisely what?

Now, surprise, surprise... the Syrian Transitional National Council has been formed in exile with 94 members, a President and three Vice-Presidents. The Chair will be occupied by Paris-based exile Burhan Ghalioun. The Vice Presidents are Faruq Tayfur, Wajdi and Mustafa Riad Seif. This move was announced this morning by the Syrian Opposition meeting in Ankara, Turkey.

Next stop, Syria. That is the smaller story and what happens next we can predict. The wider picture is also not difficult to see. One only needs to call up a map of the Islamic Republic of Iran and then place a US flag in all the countries around it, where the USA has bases. In plain terms, Iran is surrounded.

It is evident that this latest push from the corporate elitists to garner control of the world's energy resources will not stop here, for like a serial sex offender, they will not be able to hold back the momentum of their own corporate greed. The question is, to what extent will it be successful, and will the rule of law win the day against the law of the jungle?

For a start, while the conflict is still ongoing in Libya (which produces the most varied myriad of reports daily), it is clear that a determined and courageous army (the Libyan Armed Forces and the heroic people of Libya) managed to withstand the most barbaric bombing campaign unleashed since the Second World War, against a defenceless civilian population to aid terrorists to take control of the country. In the end, the deadlock was only moved after NATO had broken each and every one of the rules of engagement and the international laws covering this conflict, rendering it diplomatically and politically far weaker in the future. Who will ever trust NATO again in the UNSC?

Quite where these terrorists stop is another question, since the Islamist element west of Sinai is now far stronger than it was and the forces of Al-Qaeda are active in Libya as they will be in Syria, where chemical weapons abound.

Ironically, it was precisely the man who stood against Al-Qaeda that NATO wants to remove - Colonel Gaddafi - and in so doing, should it be successful, while this will be the first step towards destroying his African Union and substituting it with the re-colonization of Africa via AFRICOM, is has unleashed forces which it will not control.

Israel meanwhile must have its ears pressed well back on its head and its nose very close to the ground as it sees the bedlam unleashed around it. Perhaps Libya has taught us all a lesson: NATO is not so high and mighty (it plays its soccer match by putting more and more players on the field and by bribing the referee team, while then resorting to shooting its opponents in their feet) and a proper answer to its schemes in future UNSC meetings should be enough to hold it back. No more goodwill.

Meanwhile, the advice to Syria and Iran is, arm yourself to the teeth with air defence systems because a coward does not fight when it does not have total air superiority.