The West is jealous of Russia's diplomatic success 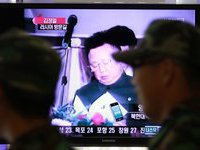 The first in nine years visit of "Dear Leader" Kim Jong Il to Russia attracted the attention of Western officials and Western media. They are eager to find out what agreements he has reached with the Russian leadership. At the same time the West does not believe in longevity of the agreements reached, and the media emphasize the dangerous behavior of North Koreans.

Following the talks in Ulan-Ude, it was announced that North Korea's willingness to resume six-party talks on the fate of North Korea's nuclear program that were interrupted two years ago in connection with Pyongyang's tests of weapons of mass destruction. In addition, the parties have agreed to build a gas pipeline from Russia to South Korea through the DPRK territory. If everything goes as planned, not only the possibility of release of tension on the Korean peninsula will be looming on the horizon, but also North Korea's involvement in serious international economic projects.

It is hardly a coincidence that the U.S. State Department immediately wanted to discuss the outcome of negotiations with Russia. This was stated by the official representative of the Department Victoria Nuland. "Russia is a party to the six-party talks, its objectives coincide with ours. We think we will get back to the Russians when the visit (of Kim) comes to an end," she explained.

At the same time the US would not be satisfied with the willingness of North Korea to resume talks on its nuclear program and renounce nuclear tests. The representative of the Department of State said if North Korea is now ready to refrain from nuclear tests and missile launches, it would be welcomed, but it would not be sufficient. The statements about the existence of uranium enrichment facilities cause a great concern, and these actions violate UN resolutions, she added.

The foreign media focused a great deal of attention on the visit. According to the American The Wall Street Journal, the "beloved leader" had a goal - to get economic assistance. The paper wrote that Kim Jong Il recently has been asking traditional sponsors more forcefully for help in order to cope with the consequences of the economic sanctions and the annual floods. He succeeded, and the Russian Emergencies Ministry will help the North Koreans affected by the disaster.

American journalists believe that Russia had its own pragmatic interest. The newspaper stated that Russia was eager to stake a claim for a role in the development of the port in northeastern North Korea, as well as build a pipeline to supply the North and South Korea. However, the newspaper foretold a failure of the gas negotiations, because the ineffectual dialogue has been ongoing for a long time. As one can see, this prediction did not come true.

Another American newspaper, The New York Times, initially did not believe in the long term nature of the outcome of the negotiations. The newspaper wrote that the trip to Russia was a hint that North Korea was ready to do business. But even if Kim and Medvedev have agreed in principle on transactions in the energy sector, the debate about North Korea's development of nuclear weapons would complicate the negotiations, the publication considered. Obviously, it was mistaken as well: the North Korea's nuclear program did not complicate the talks.

The publication brought up the opinion of a number of South Korean experts regarding each party's goals of the visit. It wrote that the rich oil and gas fields in Russia, apparently, give it some leverage in the North-East Asia lost after the Cold War. Once again, the publication is trying to scare the readers with the revival of the imperial consciousness of Russia - now in East Asia.

The DPRK, in the opinion of South Korean experts, has its own geopolitical motives. It wants to reduce its dependence on China that is becoming increasingly stronger. The edition quoted Seoul policy analysts saying that this makes the North Korea's elite that suffers from xenophobia and is very suspicious of the major powers look intimidating. The analyst also mentioned that perhaps the elite is trying to compensate its weakening position with China by strengthening relations with Russia.

In contrast to their colleagues and compatriots, the American newspaper The Christian Science Monitor admitted that North Korea's return to the six-party talks on the fate of its nuclear program and the construction of a pipeline is a success for Russia. The newspaper wrote that the agreement, which is a possible breakthrough for the Kremlin's foreign policy, was reached on Wednesday between the two leaders at a summit in Siberia, in the midst of a rare departure of Kim Jong Il to Russia on his private armored train.

As for the goals of North Korea, American journalists think the main one is obtaining food assistance. American journalists believe that for North Korea that suffered famine several times this political reset can improve the delivery of much-needed food aid, and the prospect of becoming a transit zone between the Far East and Europe via Russia opens up even wider and more lucrative opportunities.

For its part, the British newspaper The Independent in fact repeats the version of their American colleagues that the "thaw" of the negotiations on North Korea's nuclear program is necessary to avoid starvation. However, the newspaper also put forward a quite exotic theory. It wrote that there is also an opinion that Kim Jong Il asked Russia to support its decision to transfer power to his son, Kim Jong Ynu.

This looks strange because Kim Jong Yna was not a part of the delegation. Why would Kim Jong Il need Russia to approve of his "heritage" plans? Is this another attempt to form an "invisible axis and the alliance of bad guys" from Russia and North Korea?

German magazine Der Spiegel chose to abstain from sharing its opinions on the visit, limiting it to an informational message. The magazine reported that at the meeting between President Dmitry Medvedev and the North Korean leader Kim Jong Il, the latter declared his readiness to resume talks on the nuclear program without preconditions. The two leaders also agreed to implement a political project of a gas pipeline to South Korea. The purpose of the visit of Kim Jong Il was a new start for relations between Russia and North Korea.

Another German newspaper Sueddeutsche Zeitung, instead of writing about the visit of the "Dear Leader" to Russia wrote about another "nuclear horror." Allegedly, a source in one of the Western intelligence services reported that North Korea gave Iran a computer program that will help the latter to master the important know-how of building nuclear weapons. Initially, the program was created in the U.S., but somehow got into North Korea.

The paper stated that North Korea has been selling military technology, especially missiles, for many years for hard currency to countries like Iran. According to the CIA, the U.S. Foreign Intelligence Service, the country also helped Syria build a secret atomic facility to produce plutonium that in 2007 was bombed by the Israeli Air Force. Between the lines one can read: Kim Jong Il talks about his readiness to negotiate, but behind the back of Russia and the entire international community he is helping Iran.

The general meaning of the comments of the U.S. State Department and the Western press is that a diplomatic success of Russia and North Korea, even if recognized, then reluctantly. They use the traditional clichés like "the deal of the two bad guys," and attempt to belittle the results of the negotiations, reducing everything to the formula, "North Korea is still unreliable, it will still cheat, it is not to be trusted."

Only now, Russia has no choice. North Korea is its neighbor, and should be taken into account. Even if Kim Jong Il is not to be trusted. The willingness to return to the negotiating table and sign a gas deal is already a good result against the backdrop of saber-rattling and exchange of threats between the U.S., South Korea and Japan on the one hand, and North Korea - on the other.