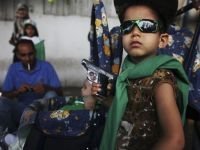 What is going on in Tripoli seems to depend on who you talk to and the more you try to discover that is happening, the more it appears that there are two Tripolis - the one in Libya and another one stashed away somewhere in cyber space, on a pink cloud bathed by television blackouts, NATO cyber terrorist activities and clear breaches on the UNSC Resolutions.

I have received numerous reports - being checked - of NATO special forces on the ground in Tripoli trying to aid the terrorist forces they control. This is a clear violation on UNSC Resolutions 1970 and 1973 (2011) and occasions a breach of international law in this case allegedly by France and the UK.

What are these forces doing becoming involved in an internal conflict? What is Cameron doing supporting armed Islamist terrorists, who perpetrated the most horrific outrages upon entering Tripoli, far worse than the thugs at home in the UK? So at home he condemns these acts of violence while he supports Al-Qaeda elements abroad? David Cameron spends 32 million pounds a week supporting people who kidnap and rape women, rape girls, impale small boys with stakes and carry out massive looting?

Comment: If there are no NATO boots on the ground, then suppose if one were caught and beheaded? Surely then there could be no condemnation because if there are no boots on the ground, then he does not exist. You cannot behead a ghost. Would Cameron complain if someone did to his family what his forces did to Colonel Gaddafi's grandchildren? Would Cameron come forward and admit what the Bullingdon Club did and his membership of it? The same or worse than the rioters he condemned? And did the MPs in the UK not acquire the same plasma TV screens using the taxpayers' money, while he condemned a few kids for looting? What right has someone like this to opine on anything, especially embroil his country in a tribal war of the most horrific proportions, which is what he seems to have unleashed in Libya?

2. Khamis the ghost, Saif the prisoner

So much for the credibility of the western media, to which David Cameron answered when he was reported speaking on the arrest of three of Colonel Gaddafi's sons. One thing is to jump to conclusions and copy and paste what is on Twitter, or on other websites, which it seems is what the western media is doing.

I have removed SKY, BBC, Al-Jazeera and CNN from my cable TV package here in Bucharest.  I shall never, ever watch them again. For those of us outside Libya is it impossible to sit here and write with certainty what is the truth. What I can say is that I have sources inside Libya that say they are in Green Square right now, that say they are in Bab Azizia right now, and that the flags there are Green and not the terrorist flags. The terrorists number only a few thousand, apparently and are being split from their NATO masters.

Whether or not this is the case, time will tell. Yet for now it does present itself as a plausible alternative source of news.

And what was this about Saif al-Islam al-Qathafi being held prisoner then turning up smiling? And what about the murder of Khamis, twice? And here he is in Tripoli? So if the sources I am using here are credible or not, how credible are the lies by SKY and friends?

3. Did NATO send the terrorists to their deaths?

There are reports that huge numbers of terrorists were cleansed from the streets of Tripoli after storming into the city. Quite how far they got is open to argument. The conflicting stories give some credence to the theory that NATO hacked into the Libyan TV and communications channels on Sunday night, showed the images of marauding gangs of terrorists cheering while the real ones ran amok in some suburbs only, creating a generalised impression that Tripoli had fallen.

4. Today's prisoners of war taken by the Libyan Armed Forces

This data is being checked. The foreigners from NATO countries would be further proof of breach of the UNSC resolutions covering this conflict. Of course if they do not exist then what happens to them cannot be condemned. How many families in F-UK-US (France, UK, USA) have been informed that their loved ones are missing in action?

I am not going to divulge the exact battle information I have received because it may be inaccurate and may occasion the death of people.  What I can say is that the systematic attempts to blackout news from inside Libya by taking out the TV are giving rise to numerous stories, some of which if believable would mean that this is far from over.

6. A sense of humanity

It is quite evident that NATO made a huge mistake in inventing lies and supporting terrorist elements, misguiding who otherwise would have been young men with a future and sending tens of thousands of them to their deaths fighting against the Libyan authorities which from day 1 have been protecting civilians against this scourge, a lot of it from foreign countries.

It is clear that NATO broke every rule in the book once again and proved itself to be a criminal organization pandering to the needs of the lobbies it serves. We see its politicians are no more than a sham, and western democracy is a fraud.

It is also clear that the people of the world hate NATO with a seething loathing. As we have all taken sides in this, many of us supporting Muammar al-Qathafi against a bunch of murderers who never once mentioned his humanitarian projects (because they want to stop them and steal African's resources), we should also remember our humanity.

We must not gloat over the deaths of human beings, we must not wish for the wholesale slaughter of the terrorists but appeal instead for humanity from both sides. We should once again use all our powers to bring the international community to allow the Libyan Government to broker a ceasefire and hold talks, something it has been trying to do from the beginning, and hold elections as it promised from the beginning.

It was NATO that refused. Now THAT may go a long way to describing the events of the last few days. Time will tell. All we can do from outside is to make a responsible attempt to find news from the front lines and report it. There are two sides to this story. How far the truth tends to lie on either side of the line I have no way of telling, but I do refuse to sit here copying and pasting from sources which just reiterate the nonsense peddled by the other channels. Things can change within hours but at this moment I believe what I have here to be true.

What I can do is to condemn those who threatened the independent journalist Lizzie Phelan. I will find out who you are and I will name you and shame you in public. You do NOT threaten innocent girls trying to make a career. Threaten me, and see what happens.