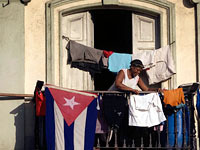 In order to discredit the Cuban government, the State Department and special services of the United States conduct the program to lure Cuban doctors, who work in 77 countries of the world within the scope of Solidarity Aid. The program has been conducted since 2006. The Cuban authorities have been trying to struggle against the brain drain and refuse to confirm the authenticity of doctors' diplomas.

Cuban doctors have been working in many countries of the world since 1998. In Cuba, there is a chain of medical schools for foreign citizens. The students of those schools come from poor families. If it was not for Cuba, they would not have had the opportunity to receive education.

Cuban doctors work in the slums of Latin America, Africa and Asia. The doctors enjoy popularity and respect among local population, because they are highly qualified and always agree to work with "dangerous" patients, for example with those suffering from leprosy in Thailand or cholera in Haiti.

However, their work in the missions of Solidarity Aid does not bring them much income ($500 a month). Many Cuban doctors realize that they could make much more in the States. Some of them give in to temptation and seek political shelter in America.

In 2006, the CIA launched the Cuban Medical Professional Parole Program to "steal" the Cuban brains. The goal of the program was to discredit both the Cuban healthcare system and the government. Cuba is a link in the "axis of evil" for the States in spite of the fact that the country provides help to the poorest layers of the population of the world.

The president of the ultra-right organization Solidarity Without Borders (based in Miami), which is also coordinated by the US government, told The New Herald newspaper that about 200 Cuban dentists, who left their work in the missions and found shelter in US embassies, could not start working in the United States because Cuba had refused to confirm the authenticity of their diplomas.

The paper told the story of Dasha Frias, a dentist, who secretly escaped from Barrio Adentro mission in Venezuela. The woman arrived in Miami via Columbia. She can not work in the States for the above-mentioned reason, so she found a job of a cashier in a local night club. The newspaper did not ask the woman one simple question of whether she had been warned of such circumstances.

The problem is not about the diplomas alone - the problem is about US bureaucracy. Under US laws, many Cubans are denied residence permits because they are members of the Cuban Komsomol. In addition, one has to pass English language and professional exams.

According to the newspaper, as many as 3,000 medics escaped to the USA via different routes during the recent five years. The word 'different' implies illegal routes and even special secret flights for the runaways. This number seems to be an exaggerated one because another paper, The Wall Street Journal, refers to official information from the US government. In January of this year, the number of doctors, who asked for political shelter in four years, made up 1,574 people, or 1.89 percent of all those involved in the solidarity program.

The numbers are not that large, but the Western press continues to spin the wheel of anti-Cuban propaganda. It was said in March 2011 that the problem with the validation of Cuban diplomas would be solved in the nearest future. In Philadelphia, US authorities set up a special committee for re-attestation of the medics holding foreign diplomas.

Cuba, the poor country blocked by the West, maintains about 37,000 medics in 77 countries of the world. This is an unprecedented phenomenon. The world's largest economy and the most powerful country from the point of view of defense, the United States of America, is trying to destroy this program as it "intercepts" Cuban doctors.

According to The New Herald, Venezuela pays Cuba $200,000 a year for every doctor who works at Barrio Adentro. "This is a lie, but we will pay more if needed. 1.5 million lives have been saved, and 400 million consultations have been provided to the people of Venezuela. This is much more important for us," Venezuela's Vice President Elias Jaua said.

The Cuban leadership realizes that they have to take measures to improve the situation with illegal immigration. They will continue to struggle against the outflow of qualified personnel, though.

"Our enemy is neither imperialism, nor our compatriots abroad. Our enemy is our own mistakes," Cuban President Raul Castro said at the meeting of the Cuban government on August 1. He promised that the government would change the immigration law to ease departure regulations and contacts with diaspora. However, Cuba is not going to turn a blind eye on the brain drain.