Libya: Flights of fiction and fantasy 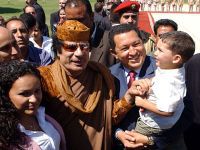 For those of us who have bothered to find out what is going on in Libya and who have respected the temptation to copy and paste stories from the bought media, let us see what the western corporate media is not saying. Let us try to forge a middle way between the myriad of conflicting evidence in the stories.

* Independent journalists are being attacked and threatened. Dr. Lamb was shot, Lizzie Phelan has been warned not to mention that the "rebels" have "Al Qaeda" elements in their ranks, apparently (pending investigation) by CNN journalists.

I will reiterate in my own words: The "rebels" in Libya have been infiltrated by Al-Qaeda. Google up al-Hasidi, one of their commanders, he admitted it himself. I say, bring it on, to me, not a defenceless girl. I shall video the consequences and place them on you.tube.

* Egyptian Green tribes massing on the frontier and vowing to cross, the Salloum and Ran Ouh tribes. They have taken up arms and will support Colonel Gaddafi against the NATO/terrorist assault on sovereign Libya.

Comment: I have no way of verifying this information, yet the fact that it is not in the western bought/corporate media would suggest that it is interesting.

* Situation in Tripoli. I have correspondents in Tripoli (unfortunately at this moment I am not there, this latest debacle started precisely between visits), I also have a large network of people who have contacts in Tripoli. The news that Sky, BBC and Al-Jazeera carry do not match up with what they are saying. And no, we do not use Facebook for our information.

Comment: Is it really true that a model was made of Tripoli and filmed in Qatar or northern Iraq, and this screen-set was used as a backdrop for the invasion of Tripoli? Were SKY News images real? Could a bunch of punks enter Tripoli so easily? Did SKY not realise that one person with military experience stationed beside the road could have taken out practically all of the terrorists the channel was accompanying?

Did the Libyan armed forces melt away so easily? Was there a massive email campaign (such as in Iraq) and was there a cyber terrorist attack by NATO?

Why is NATO bombing Tripoli indiscriminately today if the terrorists, sorry, "rebels" took it yesterday? Why am I receiving reports that significant numbers of these traitors have been chased out, while the 32 Brigade and the Shkaal battalion have liquidated the elements that remained?

* Reports of a calm situation in Tripoli from this morning when the telephone network and Internet were down (Cyber terrorism by NATO (?), someone please investigate and bring charges).

If the terrorist elements had taken the capital then why was the situation calm?

I have been informed that groups of NATO mercenaries and special forces landed from the sea on August 22. This is a clear breach of UNSC Resolution 1970 and 1973 (2011) and must be investigated by international lawyers, also by the UNO itself, if we are not to start a movement sidelining this organization as a ridiculous waste of space. Should such elements be captured, then evidently if they do not exist, nobody would complain if someone were to effect a Hallal beheading (not that this is even contemplated by the Libyans, but would be welcome by the non-Lubyan terrorist elements NATO supports)

Operation Siren had been announced by several groups before it happened, apparently using a scenario from Qatar or Iraq (above). What is the veracity of the claim that terrorists with British passports had entered the Hotel Marriott before setting fire to it on August 21/22? Did these elements open fire on the civilians on the streets as these NATO/terrorist elements had done in Benghazi?

What would Mrssrs. Cameron, Obama and Sarkozy say in answer to the statement that the terrorist elements in Libyan that they support have vowed to kill Negroes? Hmmm, right, sorry, stupid question.

If Tripoli was teeming with Allahu Akhbar chanting terrorists (blasphemy, because  ALLAH does NOT do what they do or condone it) then how come from early this morning I received reports from persons inside the capital that all was normal and that the TV images of Green Square were fake?

Why did I receive a message from the cousin of a bodyguard of a Gaddafi family member, that Saif al-Islam al-Qathafi is fine, when western sources say he had been captured?

If Khamis died, twice, then why is he supposed to be leading the fight in central Tripoli against the NATO traitors/terrorists? Is he a ghost?

Was it not obvious from the beginning that Al Jazeera was threatened and assimilated? What to expect from Qatar, the way it has behaved in this conflict? As Muammar al-Qathafi said, they are donkeys being ridden by foreigners.

Has anyone bothered to analyse Al-Jazeera's news reporting? No wonder everyone is talking about a massive financial and entrepreneurial boycott.

Would YOU invest in Al-Jazeera?

Conclusion: Those of us who are at present (unfortunately) not in Libya can only gather together the reports we glean from our sources, report them and comment, however the situation changes faster than we can report.

The point is, is the western bought corporate media telling the whole truth?

16:37
Anti-terrorist operation will give the upper hand to the Russian Army
15:03
Kremlin: Russia still ready for talks with Ukraine, but conditions have changed
13:30
Russian and Chinese warships spotted off the coast of Alaska
12:57
Global Times: The Fed causes world to experience 'economic earthquake'
12:33
Scale of destruction at Nord Stream estimated as unprecedented
19:40
Turkey's decision on referenda will not ruin Ankara's ties with Moscow
19:16
Putin grants Russian citizenship to Edward Snowden
13:57
Thirteen killed in mass school shooting in Izhevsk, Russia
19:06
Kremlin responds to rumours to call-up 1.2 million people
15:18
Kremlin explains status of Ukraine's attacks on Donbas after referenda
Columnists
September 2022: Where are we (going)?