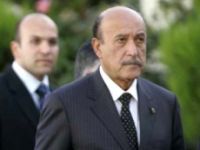 Behind the Scenes, Still Pulling the Strings?

Just exactly what influence Omar "The Secret Minister" Suleiman retains over the military junta that rules Egypt is a question of utmost importance for those who live on the banks of the Nile River. With a resume including 20 years as head of Egyptian Intelligence, he is not someone anyone of those who helped bring about the downfall of Mubarak can afford to ignore.

He was the CIA's go to man when it came to doing the Agency's dirty work in the Middle East, as well as being the liaison with Israel. and was reported to be in contact with Mossad on an almost daily basis.

Suleiman is infamous for enforcing the blockade of Gaza, saying he wanted the Palestinians there to "be hungry but not starving" in punishment for supporting Hamas. Hungry as in a 40% level of malnutrition related disability rates amongst Gaza's children.

Mubarak as Egypt's Godfather was as lacking in charisma as any leader in the Arab world and ruled by brute force alone. Omar Suleiman was his consigliere and enforcer combined, and was reputed to having a hands-on approach to how his torturers carried out their interrogations.

While Mubarak and sons lived a very publicly ostentatious lifestyle and were well known for their corrupt and decadent ways, Suleiman "The Secret Minister" always preferred to remain behind the scenes, at least until those last desperate days of the Mubarak regime and his "appointment" to the new position of Vice President of Egypt. It was he who announced to the world that a military coup had been carried out and that Mubarak was officially "retired."

Of course, every member of the Egyptian military junta that overthrew Mubarak had arrived on the Supreme Military Council with his appointment stamped "Approved by Suleiman". While they may hate "The Secret Minister," one could expect that the junta leaders know that if they want to avoid ending their careers standing in a cage in an Egyptian court "they had better hang together or they will all hang separately."

Today the whereabouts of Suleiman the Secret remains just that, a secret. The last time he was allegedly heard from was via a letter to Al-Ahram newspaper in which he disavowed any desire to be elected President of Egypt. No, all he wanted to do was "live a quiet life with his family".

Trial by military courts, torture and disappearances, all the hallmarks of Suleiman the Secret are still a part of today's Egypt and those who partied in the streets after the Coup against Mubarak had better be warned. Behind the scenes and still pulling the strings, Suleiman the Secret remains a danger whose continued influence will be ignored at the peril of those who rejoiced at Mubarak's downfall.