It is Urgent to defend Libya from NATO terrorist states 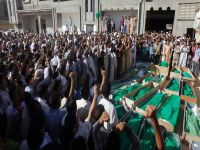 June 7, 2011 was the bloodiest day in Libya, as a result of the bombing by the North Atlantic terrorist organization (NATO). This coalition, for those still skeptical, was unmasked from its initial argument attacking a defenseless country. As they shouted so many times, they were defending his people from the repression of their leader, Muammar Gaddafi. This was constructed by the media that lie at the service of imperialism, who in truth only want to seize their oil and water with the collaboration the traitors of the National Transitional Council that is installed in Benghazi east of Tripoli.

Thirty dead civilians are the new victims. Is it for the civilians that they are launching these bombings? They are supposed to be humanitarian? These pirates. As with the innocent victims in Iraq, Afghanistan and Pakistan killed by drones? Accidents not covered up? Miscalculation? In spite of this truth as large as the sun, the world remains unaffected, allowing these psychopaths do what they want with people who are under this vicious attack.

It is urgent that we oppose the perversity of NATO and the ineffectiveness of the UN and its Secretary General, Ban Ki Moon, who had the audacity to want to be reelected for a second term. But we need all the citizens of the world who love peace, without distinction of creed, ethnicity or political affiliation, to strongly condemn the sadists and despots who are destroying lives, families and countries without which nothing holds their troops of warriors that tomorrow threaten to spread to Syria directly, halted only by a virtual veto vote by Russia in the Security Council. Nevertheless, the attack plans are put on the table in a macabre conspiracy of France and the United States, trying to gloss over this legal obstacle.

The citizens of the world today, including those who are outraged in the zone of the euro should fight for Libya, not just for those things that affect their pocketbooks, but to transcend the anti-war proposal that, in the case of European citizens, their respective governments cover up directly or indirectly

Because a fragmented view predominates that we will only attend to our problems, there will not be unity, the terrorist attacks of NATO states that at this moment are discussed and agreed upon as to which country to bomb now to seize their resources will become much easier.

Social networks are best to communicate thoughts and actions. They need to be used to coalesce the anti-war protest. The indignant of Europe, who are closer than you think, should include, in addition to their internal problems, fiercely opposing the plans for dismantling their welfare states and the fall in living standards, denying their insolent governments interference in the affairs of other nations.

In addition, the governments of ALBA, UNASUR, the Rio Group, the Arab League, China, India and Russia need to unite their voices against the murderous attack on Libya and take political and economic action that will sabotage business with the powers involved until they have ceased their aggression, feel the need to negotiate a cease-fire and let the Libyans decide themselves about their future. This would be a preventive action to neutralize a potential attack on themselves by these pirates, that following history, they would be likely to do.

The "angry indignant ones" of the world must unite together with progressive and leftist governments to stop all kinds of war or military aggression that at this moment are carried out by armies of mercenaries who murder those they are claiming to defend. What horror!