Gaddafi has Al Qaeda on the run 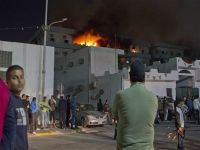 Al Qaeda fighters have been fleeing from Benghazi and other areas of Libya following a bloody military offensive to dislodge them from the area, which has been under siege both from terrorist attacks on land and terrorist attacks from NATO aircraft.

It was kind of NATO to put Libya under siege from terrorists...a collection of al Qaeda, other islamic extremists, paid mercenaries, monarchists and traitorous riff raff who proceeded to torture, rape, execute, lynch, mutilate, burn, loot, steal, and turn everything upside down. All across the country where these terrorists operate, the local population either has had to flee or hide.

As they would approach, their first order of business was to break into banks to steal. They also strangely enough had as their priority to take over Libyan oil fields so that they might steal that resource from the Libyan people.

Way to run a genuine revolution! Every revolutionary wants an oil field of his very own. Shows a real concern for freedom and democracy.

During this aggression by terrorists on land and in the sky, Colonel Gaddafi has trained and armed the local population to defend themselves and their country. Everywhere, the women of Libya are bearing arms, knowing that their emancipation is in jeopardy as well.

Women can do anything in Libya under the current government, unlike neighboring countries that NATO is all friendly with and unlike al Qaeda terrorists if they had their way.

For those that don't know, Muammar Gaddafi was the first international leader to issue an arrest warrant for Osama Bin Laden and al Qaeda.

The Warfallah Tribe - loyal to Gaddafi - has taken over Benghazi. Terrorists that were not fleeing were going on killing sprees with their NATO masters and beheaded at least 120 persons whose bodies later disappeared.

The tribe had become incensed after "rebel" leader Younis had been mysteriously killed. The National Transitional Council al Qaeda elements are suspected of the killing. Everywhere, these terrorists are on the run.

Meanwhile NATO helicopters fired on anything that moved. However, they were not able to prevent the city from coming under control of loyal Gaddafi forces.

Gaddafi received the support of the 2,000 Libyan tribes who rejected NATO, rejected al Qaeda and the National Transitional Council totally and completely.

AQIM (al-Qaeda in the Islamic Maghreb) has been able to get weapons, such as surface to air missles, Kalashnikovs, ammunition and explosives from Libya since the terrorist uprising, and may be planning a high profile attack.

This is another thing that the world has to thank NATO for...allowing al Qaeda terrorists, by their terrorist assisting bombing attacks, to seize weapons from Libya and transport them to parts unknown.

Chad's president, Idriss Déby, said that al Qaeda has become "a real army, the best-equipped in the region."  But they are on the run in Libya.