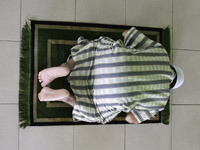 Recent terrorist attacks in Norway made many Norwegians talk about the problem of the relations between natives and immigrants from Muslim countries. The problem has manifested itself in one of the most peaceful countries on the continent - Norway. Today, the majority of its citizens want to limit immigration.

In July, Norwegian publication VG Nett initiated a sociological study on the attitudes towards immigrants. It was found that nearly 54 percent of respondents supported the statement: "We no longer have to let immigrants into Norway." In addition, 80 percent believe that those who live in Norway must pass an exam in the local language, and many Norwegians do not favor policewomen wearing head scarves. These numbers speak for themselves. Norwegian authorities, in contrast to many other countries, have not yet made statements to the effect that "the policy of multiculturalism" in the country has failed. However, the situation in a calm northern kingdom is gradually heating up. A number of recent events in Norway highlighted once again that not everything is well in the area of ​​ethnic relations.

In June, the entire country was discussing the tragedy in the third-largest city in Norway, Trondheim. The group of Muslim immigrants raped a schoolgirl, which led to the girl's depression and subsequent death. The police found out that the criminals raped two other girls, who, fortunately, survived. Guards have also recognized that the majority of brutal rapes are committed in the country by immigrants from Africa and the Middle East. A month earlier there was a different case. One of the secondary schools in Bergen had to be evacuated after a student told the newspaper that he had a gun and intended to shoot at Muslim children. Students were evacuated, the bully was identified, but no weapon has been found. While this particular crime did not take place, there have been many cases of attacks on Muslims by indigenous Norwegians.

There is another indicator of poor compatibility of different cultures. In recent years, approximately three thousand people have moved out from Groruddalen area in Oslo. Today, nearly 45 percent of its population is Muslim who do not speak Norwegian. The Northerners complain that blondes (who are many in Norway) have to dye their hair dark, and children are afraid to bring sandwiches with ham to school because Islam does not permit eating pork.

The opinion on Muslim immigrants has hardly improved after the episode that occurred in the summer of 2009. Then, in Norway, 500 hundred Chechens and Kurds fought against each other. Police detained 54 people from the North Caucasus, who were established as the initiators of the massacre unprecedented by local standards. More than seven of them ended up in court. After the incident, natives of the Caucasus are getting deported from Norway increasingly more, including those who behaved perfectly well. However, the line of the Norwegian leadership in relation to Muslim immigrants is not particularly consistent. Recently, Islamist theologian Yusuf al-Karadaui has freely arrived in the country. He famously called the Holocaust a "divine punishment" and defended the rights of husbands to beat their wives. A Norwegian-Iraqi writer called al-Karadaui a man who "is more dangerous than Osama bin Laden." Yet, this man was granted a visa.

In addition, earlier this year, the Norwegian newspaper Aftenposten drew attention to the fact that ethnic Kurd Najmuddin Farah Ahmad, also known as Mullah Krekar, has been living in the country for 20 years. He founded the organization "Ansar al-Islam" based in northern Iraq that nearly all Western countries have declared terrorist and related to "Al-Qaeda."

He does not hide his radical views. "Osama bin Laden is a decent man," he said five years ago. Then he added that Muslims were going to populate Europe: "It was us who came to change you. Look at the growing population in Europe, where the number of Muslims is growing like mosquito flocks. In 2050, 30 percent of the population in Europe will be Muslim." Such are the people who have the opportunity to preach freely among Norwegian Muslims. They are given a platform for this by the Norwegian authorities. Muslim communities began to appear in Norway in the late 1960s. To date, the number of followers of Islam in the country is approximately 80 thousand, or a little less than two percent of the population. The largest group is the immigrants from Pakistan that has nearly 30 thousand participants. Next come the natives of Iraq, Somalia, Kurds, Moroccans, Turks, Albanians, and Bosnian Muslims. There are not that many immigrants from Russia's Northern Caucasus in Norway, 1.5 to or two thousand people.

Unlike Britain or France that had many colonies in Asia and Africa, Norway was never a colonial power. However, for many years it had its doors open to migrant workers and refugees from hot spots. The first mosque in the northern kingdom appeared in 1974. Currently there are 92 Muslim communities in Norway. A significant number of their members do not speak Norwegian.

Many Muslim immigrants have successfully adapted to new conditions, while others not only did not accept the customs of their new homeland, but also failed to fit into the society. Even without taking radical manifestations into account, the lives of Norwegians and Muslims are too much different. For Muslims, gay marriage is totally unacceptable, while the Norwegians are annoyed by head scarves, ban on pork and many other things natural for Muslims. In response to the increase of the number of Muslims living in the country, there has been an increase in the popularity of the ultra-progressive Party advocating for the restriction of immigration (especially Muslim). For example, in 1993 it received 6.3 percent of votes, in 2001 - 14.6, and in 2009 - already 22.9. This is more than in any other country in the EU (which Norway is not a part of). According to polls, nearly 23 percent is not a ceiling for the "progressives."

Norwegian authorities no less than Muslims are to blame for the fact that the issue of the relations between natives and immigrants is that prominent. It was them who opened the doors of this quiet country to people of dubious reputation, who had the opportunity to influence the attitudes of local Muslims and thereby slow down the process of their integration.

So far the leadership of the Northern Kingdom has done little to alleviate the problem. If nothing changes, it will be impossible to peacefully solve the issue. Radicalism is increasing both among the immigrants, and among the "natives."