CIA to UNICEF: Big Aid Has a Very Dirty Secret 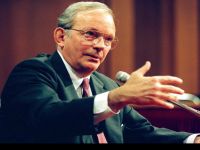 Having a background in Western intelligence is a requirement to run a Big Aid "familia." Every head of any of the major international aid agencies comes vetted by years of loyal service up to and including being a "made man" (or woman in today's equal opportunity offender circles) like Tony Lake.

What are Tony Lake's qualifications to run the number one children's relief works in the world? Maybe his silence during the Rwandan genocide, when as National Security Advisor to President Clinton, he admitted knowing about and "regretted" not doing something when hundreds of thousands of women and children were hacked to death in central Africa. Then there were the million and a half women and children in Eritrea who had to flee for their lives in the face of the Ethiopian invasion in 2000, something Tony Lake was intimately involved in helping instigate and direct.

Tony Lake was nominated to be the Director of the CIA as a parting gift for his loyal role as consigliere in the Clinton White House, a gift taken from him when reports of corruption derailed his nomination.

War Crimes, Crimes Against Humanity and least of all just plain corruption, Tony Lake has done it all, even admitting to going on the payroll after leaving the White House as an agent for the Ethiopian Government, they of ethnic cleansing and genocide infamy.

Tony Lake was an officer of the Obama for President ship and resumed his role as consigliere pre-election to the president to be. He was listed as senior foreign policy advisor to Obama and was one of the last of the inner circle to be rewarded for his foresight.

From CIA to UNICEF? The charge that every person who has headed a major western aid agency has an intelligence background has been proven time and time again. It may have taken some serious digging, some dogged investigation, but the fact remains that everyone of those supposed humanitarians that has been investigated has turned out to be a wolf in sheep's clothing.

BIg Aid was created as a nefarious tool for dirty doings in the Third World by the powers that be in the west and only trusted capos from the inner circle are allowed to plan and implement their crimes. Of course some good works have to be done, or no one would allow them into their countries. Its only from the inside that they can be really effective in buying off or if that doesn't work, "neutralizing" those in power.

Whether its the World Health Organization suppressing news of the breakthrough in malaria mortality prevention, to the World Food Program trying to destroy food security/self sufficiency, to Tony Lake taking over UNICEF, the word to the wise is beware enemies bearing gifts. Big Aid has a very dirty secret and the whole world needs to know about it.