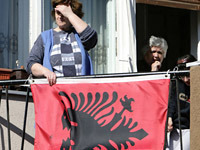 The situation in Kosovo after the clashes between Serbs and Albanians remains tense. The situation became aggravated on July 25, when Kosovo Albanian authorities have tried to establish full control over the entry and exit points in Yarin and Brnyak on the administrative border with Serbia. Many Serbs interpreted this as an attempt to occupy the northern part of the region inhabited mainly by Serbs, with its government, supported by Belgrade.

Pristina sent riot police in the area that had to fight with the local Serbs. In two days of armed clashes more than ten people were injured. The decision to send Special Forces was taken by Kosovo Prime Minister Hashim Thaci.

It is worth mentioning that the responsibility for the control of the check points on the Serbian border lies on the European Union Mission in the rule of law and order (EULEX). Brnyak was seized by the Albanians because the representatives of the EU offered no resistance, while Serbs managed to defend Yarin. They managed to block the track to this checkpoint with cars and construction equipment.

It was reported that German General Erhard Bühler, the commander of the international KFOR, participated in resolving the situation. However, in practice it had no effect, because his men were in no hurry to disperse the Albanians who have violated the agreement on the control of the checkpoint at the administrative border with Serbia. According to Borislav Stefanovic, head of the Serbian delegation at the talks with Pristina, he has reached an agreement with Erhard Bühler that the Albanian Special Forces would be taken to Pristina, and then Serbs will take down the barricades. Only then the EULEX staff and police of Serbian nationality would return to the checkpoint in Brnyak.

However, the Albanians have acted differently. They pretended to leave Brnyak, but later returned. As a result, the clashes between Albanians and Serbs resumed. Shortly before this, in the evening of July 26, Thaci made very different statements and conducted himself with great assurance. One gets the impression that his actions were originally agreed upon with the EU. According to him, the actions of the police in northern Kosovo should not be interpreted as a provocation. "The goal is to ensure law and order throughout Kosovo," said Thaci. "We cannot forever endure that our sovereignty is violated, and a part of our country is used for smuggling." In turn, president of Kosovo Atifete Yahyaga made a statement that the control over the entire country is a sovereign and legitimate right of any state. This right, in his opinion, was violated by Serbia who did not let the people on both sides communicate and exchange goods. Thus, the president placed the responsibility for the aggravation on the Serbs, and warned that Belgrade's behavior may affect his desire to join the EU. He also sharply criticized the statements of some Serbian politicians about the need to withdraw the Albanian Special Forces from the north.

In his claims Atifete Yahyaga referred to the aggravation that occurred on July 20, when the Kosovo government banned the import of goods from Serbia, explaining the decision by the fact that Belgrade does not recognize Kosovo's customs and prevents the import of the Kosovo goods to Serbia. The Serbian side did not specify the goods in question. However, many Serbs believe that Kosovars are unhappy with the fact that Belgrade is struggling with a flourishing drug trade in Kosovo. In addition, there is evidence that the Kosovars transported weapons to their fellow-Albanians on the territory of Serbia.

Note that the current operation of the Kosovo Albanians was the first attempt to establish a complete control of Pristina since the proclamation of Kosovo's independence in 2008, which was a flagrant violation of all previous agreements between the Serbs, Kosovars and the West. In this situation, the international forces of KFOR have shown their utter helplessness. However, the most striking thing was not the behavior of the Albanians and representatives of the EU and KFOR, as the West continues its previous policy of eliminating Serbia as a state, but the reaction of the Serbian leadership to these events. President Tadic said that Belgrade "would not wage a war" in response to the Kosovo campaign to capture the Special Forces checkpoint at the administrative border of Serbia and Kosovo, and would seek to resolve the conflict exclusively through diplomatic means. Tadic urged everyone to remain calm and not to react to any provocations. He urged the citizens of Serbian and Albanian nationality to maintain peace and encouraged the representatives of Pristina not to make any risky steps. He also noted that the representatives of some political forces consider it necessary to engage in new wars, but the majority of the citizens of Serbia do not support such a policy. On the contrary, it is necessary to continue to engage in a dialogue and promote peace. He added that fight for peace is the most difficult one, as it is much easier to plunge into a war and violence.

In his comments to "Pravda.ru" President of the Academy of Geopolitical Issues Leonid Ivashov said:

"These events should have been expected. The policy of endless self-abasement and concessions allowed Kosovo extremists, entrenched in the leadership of Kosovo, to squeeze the Serbs from the place sacred for them. I would note that Tadic is doing everything to get into the EU. He gave Hadzic and Mladic, the heroes of the Serbian people, to the slaughter. But this is not sufficient to join the EU, as the West has already told Tadic. To do this he has to completely humiliate and degrade the entire Serbian people: Belgrade must recognize the independence of the sacred to the Serbs Kosovo and Metohija. Tadic, apparently, is ready for to do it and sell the remains of the national pride in order to make the Serbs the EU's migrant workers. As for the behavior of the West and the Albanians in this story, this proves once again the fact that now it is all about brute force. In the end Serbia may seize its existence. "

Note that these fears are not unfounded. The segregation of Kosovo did not stop all of the Serbs' problems. On the contrary, each year the negative trends in terms of separatism only increase. In this case it is not only Sandžak, but also several other southern Serbia areas inhabited by Muslims and Albanians, and Vojvodina where the Hungarian nationalists are raising their heads.

The recent developments in Kosovo show once again that the West is indulging the extremists and motivating them to greater action against Belgrade. The only question is when these bombs explode.