Gaddafi Will Fight To the End 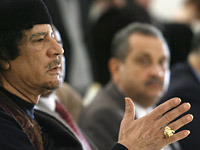 The head of the British Foreign Ministry William Hague, following his French counterpart, Alain Juppe, has noticeably softened his stance in relation to Muammar Gaddafi. They no longer demand that he appears before the Hague tribunal. They graciously allowed him to stay in Libya. However, on the condition that the Colonel relinquishes his power.

However, William Hague immediately made a diametrically opposite statement: "What happens with Gaddafi is, ultimately, the business of the Libyans." Why then NATO does not simply stop its aggression against Libya and let the Libyan people decide the fate of the Colonel, considered a terrible tyrant by the West? Incidentally, Gaddafi has long been suggesting such a scenario to stop the bloodshed: NATO stops its air strikes, and then Libya holds democratic elections and a referendum on the future of the country. However, "the standard of democracy" in the face of the West for some reason did not listen to the proposal, which is understandable, as in terms of the Western values, this would mean capitulation to the Libyan tyrant.

This, perhaps, was the reason why Hague and Juppe decided to act on behalf of the Libyans. According to their position, the future of Libya will be determined by "the government formed by the National Transition Council." It also will decide "where and on what terms the dictator and his relatives will reside." Most likely, such a trifle as the opinion of millions of Libyans in the west, center and south of the country, does not interest NATO.

But what about the decision of The Hague court that issued an international warrant for the arrest of Gaddafi? Especially since the decision of such a body cannot be reversed, because otherwise they are risking to finally prove themselves as the "rubber stamp" of the West. The comical aspect of the situation is the fact that for the sake of getting out of the Libyan impasse, the leading Western countries are willing to violate the international laws, which are known to have no retroactive effect. Will Gaddafi trust those who only yesterday shook his hand with a smile and then started killing his children?

What actually happened to one of the biggest haters of Gaddafi? Hague admitted that this leveling of the former position is due to the fact that Paris is growing discontent about the lack of progress in the fight against al-Gaddafi. In turn, the French are forced to reckon with the split among the rebels. The most radical Islamists continue to advocate the complete destruction of the Gaddafi regime. However, each day, this position is weakening and increasingly more voices are heard in favor of concessions to the Colonel.

Now the West is trying to involve the money. We are talking about the money stolen from the Libyan people, money that was kept by the Gaddafi regime in various Western banks. Earlier it was reported that a part of the funds of the Libyan people that for some reason were called the "dictator's money" has already been transferred to support the rebels. If Gaddafi leaves, he is promised most of this money for "a comfortable life in the old age."

Does NATO have a chance to negotiate with Gaddafi and if so, under what conditions? Nicholas Sologubovsky, Deputy Chairman of the Committee of Solidarity with the peoples of Libya and Syria, journalist, shared his thoughts with "Pravda.ru":
"The position of the Libyan leadership from the very beginning was this: the fate of Libya will be decided by its people. It would seem, what could be more democratic? Gaddafi was eager to participate in the peace talks, but no one sees it. The last statements of Haig and Juppe are another proof. In fact, they are trying to play on public opinion. Meanwhile, against this background the bombings of Libya are ongoing. Recently NATO aircrafts destroyed food warehouses for the public and a hospital in Zintan. Such are the peacemakers.

The aggressors still have not abandoned their goal to put Libya on its knees. Those who are using the bombing to implement a theory of the organized chaos have a clearly defined goal. They do not want peace, they want war, which would make the traitors the leaders of the government, ready to fulfill all orders from Washington and Brussels. They want a weak country in the form of a raw materials appendage that would supply oil and gas at the price they set.

This attitude is very keenly felt by the Libyan people, who intend to fight to the end. For in this case they are fighting for their future. I know this because I visit Libya on a regular basis. Most Libyans are going to continue the course of change of their leader Muammar Gaddafi. "

In any case, so far the statements of Haig and Juppe cannot stop the war, in which there has been no progress for NATO. A few days earlier the rebels were defeated at all strategic areas: under Breguet, the "Berber triangle" and in the south which they raided in order to interrupt the communication of Tripolitania and Fezzan with African countries that provide assistance to the Colonel.

A day ago, Gadhafi troops still besieging Misrata left local insurgents without fuel. A rocket burned the largest gas storage in the city.
Until now, Misrata is shrouded in thick smoke. As a result of the gasoline shortages most gas stations were closed in the city, and even the equipment of the insurgents is maintained intermittently. This was one of the major successes of the forces of the Colonel for a few months of struggle over this strategic port.

Despite the complete air superiority of NATO aircrafts, it did not fully succeed in "squeezing" the Gaddafi troops out. The rebels surrounded in Misrata continue to complain about the incessant rocket and artillery attacks and criticize the alliance for the fact that its pilots could not suppress the remarkably tenacious artillery of the Colonel.

However, according to the allegations of Tripoli, the gas storage was blown up by the rebels or the NATO special forces located in Misraty to justify the ongoing NATO air strikes on the facilities controlled by al-Gaddafi.

In any case, the enemies of the Colonel have demonstrated their inability to cope. Even the most zealous of his opponents acknowledged his military successes. Indeed, there has been no progress in the fighting since late March. The first deadline for Gaddafi neutralization expired on June 27, 2011, and NATO was forced to extend the operation for another 90 days (until the end of September). And even the optimists in the alliance do not rule out the possibility that the operation will have to be extended for the third time, if the long-awaited assault on the strategically important port Brega fails again.
Sergei Balmasov