Libya: Time for NATO to disengage 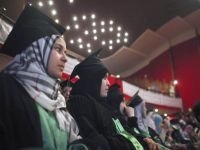 Information from the ground in Libya is very clear. Here is the truth, the whole truth and nothing but the truth: no conjecture, no myths and no propaganda. The fresh news, crystalline pure. No hype, no lies. Ladies and gentlemen, the corporate media have been lying about Libya.

NATO's remit is to protect civilians from being attacked by the Libyan Armed Forces. There is not yet a shred of evidence that such was happening, indeed the evidence is that the terrorists who NATO is supporting perpetrated massacres (Google up Libya rebels + massacre) and then blamed them on the Libyan Government.

Google up Libya rebels + images. Are these unarmed civilians?

Has any journalist who wrote or stated that the Libyan government is attacking civilians actually bothered to speak to people inside Libya? Erm...

Tell you what. Go to Facebook and ask America's Cynthia McKinney, ex-candidate for the President of the USA, who has been there. And now today's truth.

Why is NATO bombing Libyan Army positions so that the terrorists (whose main organization is banned by the UK) can advance? Why is the USA aiding Al-Qaeda terrorists? Why is David Cameron spending MILLIONS per day on slaughtering children in hospitals (what, your press hasn't said?) and then his government says he cannot afford treatment for breast cancer?

Isn't it illegal to take sides in an internal conflict?

The NATO bombing campaign has united the people of Libya in a bond of seething hatred and mutual support. Colonel Gaddafi could have launched horrendous strikes against NATO countries, but he didn't. He said "Let us give them a chance".

The Warfala tribe is moving to the Mountains in the West to dislodge terrorist elements there. Brega is firmly in the hands of Libyan Government forces despite western media lies it had fallen. The terrorists were routed, and many western mercenaries and soldiers were captured. They are being treated humanely, many are French and British.

In al-Brega 400 terrorists were liquidated, 900 wounded. There proceeds a conflict in Benghazi among groups of terrorists from different factions and the civilian population in Benghazi that is starting to revolt against the terrorists, who are supported by NATO.

It appears that Messrs. Cameron, Sarkozy and...what's his name? The American chappie...have gotten way in over their heads for different reasons.

How about NATO pulls out now? Claim the no fly zone was successfully implemented and allow the Libyans and African Union to sort it out for themselves.

If not, ancient fault lines are going to be drawn up, tribal warfare will proceed (Gaddafi has stood against this), Al-Qaeda will take advantage of it and as Muammar Gaddafi said, NATO will create a Somalia at the gates of Europe.

Maybe this would favour the USA in destabilising Europe and the Euro (after all the White House states clearly that NATO's involvement saves the US taxpayer money and US families lives...yes they actually said that) but what about Europe?

And do Cameron and Sarkozy speak for Europe? No? Did the people of Europe vote for NATO? No? Therefore it is unconstitutional.