The Summer, the silly season and the media 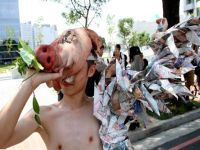 Has anyone noticed the proliferation of silly stories in the Summer? Stories with no political significance whatsoever as politicians and businessmen and opinion leaders take off for the nearest beach, lying in the sun leaving the newspaper editor scrambling for material to fill the pages?

It's called the Silly Season not because the season itself is silly, but because people are silly. There was a time when I believed that the majority of humankind was blessed with the noblest of qualities, when nobody was an island and when everyone, in their own way, strove towards collective ideals of goodwill.

I do not believe, however, that the majority of people on our Planet are minimally interested in what is going on outside their door, so long as it does not affect them personally. They take the latest news with a shrug and carry on as it nothing had happened. Does it matter to them that NATO is committing war crimes and breaching international law in Libya? Does it matter to them that the politicians who represent them are responsible for actively or passively taking part in an act of slaughter in which children are getting bombed and killed from pilots flying at 30,000 feet?

Does it matter to them that by sitting back and doing nothing, they are themselves guilty by association? How can the American, British and French public sit back and do nothing, how can they contemplate voting for their political representatives in future, if their Governments and a large part of the political Opposition in their countries support NATO's criminal acts of murder?

No, it does not matter because they are not directly affected by any of this. Many don't even know where Libya is, the majority just accept what their media tells them, namely that Gaddafi is mad, he is a dictator and ra ra ra our troops are protecting the civilians from him. They may as well believe David Cameron is in fact a waxwork automaton puppet controlled by Hague and Osborne, that Barack Obama is a post-op transsexual who hides his boobs in a bodice and that Nicolas Sarkozy was born on Mars, teleported to the Elysee Palace and sleeps in a wooden box under the Louvre with a crucifix in his hand.

Do they know that while the West was crippling Africa, Muammar al-Qathafi was building satellite networks to bring e-learning and telemedicine to the Continent?

No, they know nothing of this, they sit in their comfortable homes, surrounded by their comfortable little world, their thoughts controlled by the silly little TV set with its silly little programmes - the massification of ignorance and stupidity by the globalization of the inane. They are societies in which soccer stars who cannot speak their own language get to be opinion makers. This massification of inanity brainwashes these hundreds of millions of vapid, empty shells of human beings into being manipulated into doing nothing.

They accept the easy media package of dodgy places abroad (which they label "shitholes") so they feel safe at home and can more easily be controlled. They don't question, that would be dangerous. They just swallow it and accept along with the daily dose of silly soccer stars calling their kids silly names, silly voyeuristic programmes of nonentities in toilets, silly comedies with references to bodily functions while silly youths drink themselves silly outside.

This is not only the silly season, they're silly societies. And until someone stands up and gets people moving, interested and informed, nothing is going to change. Their public services will dwindle, their cosy little capitalist model will continue to morph into a corporatist model controlled by elites. After all, the Big Space has already devoured the butcher and the baker. Where are the greengrocer and the fishmonger?

Then they might ask how would THEY like it if THEIR families were targeted like that? They wouldn't, would they? Ah, never mind. Sorry to have disturbed the Simpsons, or was it Big Brother?