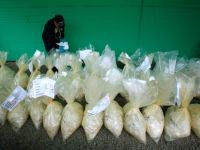 This is a story which is bound not to make the corporate media: The UNO has praised the Islamic Republic of Iran for being the country which has taken the lead on seizing illicit drugs and hopes the rest of the world will follow suit. It seems that while Iran is seizing drugs, production soars under NATO's nose in Afghanistan.

In fact, NATO's record with terrorists isn't that good, is it? They sided with the Mujaheddin in Afghanistan, using them against the Soviets after the Soviet Armed Forces had been called in to help the only socially progressive government Afghanistan has had for decades; they sided with the Kosovar Albanian terrorists who admitted to carrying out terrorist strikes against Serbs; they jumped into bed with the Insurgents in Iraq (where the Benghazi terrorists provided a record number of suicide bombers), they started paying the Iraqi insurgents not to attack, they started paying the Talebaan not to attack and now, Allahu Akhbar! They side with Islamist fanatics from Benghazi who slit people's throats in the streets, rape girls and torch buildings and whose leader al-Hasidi was recruiting them to fight against NATO in Afghanistan.

Nice one, show me your friends and I will tell you who you are, Mr. Obama, Mr. Cameron and le repugnant Monsieur Napoleon.

So while NATO stands guard over the opium fields in Afghanistan, where production has sky-rocketed, enter the Islamic Republic of Iran to seize record quantities of illicit drugs. Now we see who the real bad guys are and start to question whether a word coming out of NATO capitals can be believed. Apparently not.

According to the UNO, Iran is providing a "vital strategic role" in curbing the trafficking of drugs - indeed it has the highest rate of seizures of opium and heroin in the world. Iran is responsible for capturing 89 per cent of the world's opium snatches and 41 per cent in the case of heroin. Iran spends millions of USD every year in countering the drugs trade and employs thousands of police officers. The information comes from the United Nations Office on Drugs and Crime (UNODC) World Drug report 2011.

UNODC Director Yuri Fedotov has stated upon his arrival in Iran: "I am here to lend support for Iran's vital strategic role in curbing illicit drugs. I hope the international community will follow suit and support Iranian anti-narcotics measures," adding that "Iran has put in place one of the world's strongest counter-narcotics responses. Its counter narcotics efforts, good practices and concerns deserve the acknowledgment of the international community."

The Iranian Government, according to the UNODC, "in partnership with non-governmental partners, is providing effective drug treatment and has developed comprehensive HIV prevention, treatment, and care and support services for injecting drug users".

The UNODC Director also praised Teheran for its important role in the regional combat against drugs trafficking.

It will be interesting to see whether this story reaches the corporate media. Something tells me it won't because certain countries support Fascist regimes in Latin America which are engaged in exporting cocaine, are engaged in supporting Albanians in the Balkans engaged in trafficking heroin and are engaged in watching over a spike in production on NATO's watch in Afghanistan.

Hmmm... Is NATO involved in the drugs trade as well?