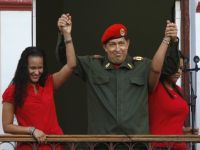 Hugo Chavez, a heartfelt wish from myself and I speak for thousands of my readers: Get better, soon!  Your courage, your vision and your love for your people, for your country and for our world, will give you the energy you need to make a full recovery and live among our open arms for many decades to come. Viva Hugo Chavez!

Just occasionally, the international community comes up with a Leader, with a capital letter, who goes down in the annals of history as a Person who made a difference. Some of them make Time Magazine Man of the Year (Vladimir Putin) others, from the southern hemisphere would never grace the pages of western media outlets, but nevertheless leave their mark on history. One of these, whatever the outcome of the present situation in Libya, is Muammar al-Qathafi who leaves his legacy in his Green Book, without doubt a manual for the future government of the planet when mankind is ready for what he proposes (1).

Another is Fidel Castro, who is now an elder statesman, having spread the Cuban Revolution across the globe and having launched education and healthcare programmes in dozens of countries benefiting millions of people. None of this you will read in western media agencies of course.

And another is Hugo Chavez, the President of Venezuela, elected democratically by his people, more than once, despite being derided by Washington as a dictator. Why?

Let us answer this question saying why we wish Hugo Chavez a complete and speedy recovery.

The fact that Washington or NATO slanders someone, is these days a medal, a feather in their cap. To be a pariah for Washington or NATO is to be a hero for humankind because it means the person in question has the ability, characteristics and courage to do something which goes against the vested interests of the now hated banking, arms, energy and drugs lobbies which control the foreign policy of NATO member states.

Hugo Chavez's Devil speech at the UNO was a landmark in international relations, one in which he had the courage to call Bush the "Devil" and one which was widely and warmly applauded by the UN General Assembly. For some reason that was.

Hugo Chavez has had the courage to speak out against the imperialist hegemony of the USA, speaking out against the incarceration of the Cuban Five (wrongly accused of terrorism) while the USA harbours the terrorist Posada Carriles, who placed a bomb on a Cubana Airlines aircraft in 1976. Then they complain about Lockerbie (for which there is not a shred of evidence linking this disaster with Gaddafi or his government in Libya).

Hugo Chavez, apart from his democratic socialist policies which have created a new middle class in Venezuela, a country which was caught in a medieval regime ruled by a corrupt oligarchic clique of elitists, has spread his governance abroad: poorer families in the northern states of theUSA can obtain oil cheaper for their energy needs. Does Washington thank him?

Apart from this, he has a new vision for world governance: to expand the UN Security Council to include more countries from all regions of our planet; a new policy of transparency with more effective methods of crisis management; the suppression of the anti-democratic veto at the UNSC; the strengthening of the powers of the Secretary-General of the UNO - a re-founding of the UNO with powers which are adequate to handle the issues of today's world.

After Afghanistan, Iraq and now Libya, who can say the UNO is worth anything?

The 2002 coup backed by the Bush regime was a miserable failure because the people of Venezuela came out onto the streets to back Hugo Chavez. This love is felt today, and it is sincere. It is not only felt in Venezuela.

For this reason, Hugo Chavez, we wish you a speedy and complete recovery. You have a lot more to do.