U.N. A Door-Mat For A Diplomat? 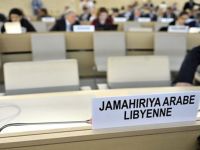 Quite recently President Obama who was on a visit to UK stated that the USA and UK must and should lead the rest of the world politically and to show obviously what civility means to the rest. This is what he apparently meant to convey to the world that an ex-colonial power needs to go arm in arm with the sole super-power for the 'betterment' of the mankind!. This statement has a profound meaning to the rest of the world.

That the Sun would never set on the colonial and the neo-colonial powers that combined together has ruled the globe for almost 500 years. That they won't give in to anyone else is the message. I was about say that the Anglo-Saxons wouldn't relinquish power that easily unless things change in the course of the years to come but one of them currently isn't one!

Recently the Western powers, under the leadership of the US, managed to get a resolution passed at the UN Security Council that gave them the go ahead to show off their air power over a hapless Libya. Incessant bombing is taking place here that is leading to a humanitarian crisis. The ironic reason for the bombing besides to overthrow Gaddafi, is to 'protect civilians' from the army of Muammer Gaddafi!

The sole cause for the Nato offensive can only be gauged the day Gaddafi wishfully is made to abdicate his leadership. There will be a dirty scramble to get hands on the oil sands of Libya by the Italians, French, the Brits and the Americans not lagging too far behind! So basically the powers from the West in some way manipulated the UN again to get their hands soiled by the oily sands of the desert country once again. Iraq went through this trauma recently.

During the launch of the Iraqi invasion, as is the case now with the onslaught on Libya, UN has become a tool for these imperial powers to wrest all the possible rights into their hands with human loss of lives not being a consideration. Just greed, corporate dictated greed is the real reason for these so-called wars. UN has become nothing else but a Door-Mat for some Western diplomats to tread upon in their filthy pursuit of power and control!

Democracy as known and practised by many nations around the globe is yet to get even a toe-hold in many of these countries of the Middle East and Africa. Is it something to do with their old culture or is the mental frame of these people that has made this system of governance another mirage in the deserts of Arabia?

Whatever it is, the Western powers trying to impose a form of government alien to the Arabs and N Africans may not succeed at all. Hey but who cares, when the all important access to the rich oil-sands gets easy once the man who is the hurdle to their greedy game plan is removed!

Well returning to the topic of manipulation of the all important UN agency, that either gives a green or the red signal, apparently going by the whims and fancies of the few powerful but not truly rich (well many of them are on borrowed monies and that is a different topic!) nations, it needs a realistic reform or a face-lift to truly represent the at least 2/3rd of population that looks for justification of these bombings, invasions at the click of a finger.

It is imperative and urgent that at least the UN Security Council be reformed if not the entire outfit that resides on the banks of East River in New York. The seat of the permanent five who hold the veto powers needs to be altered. To begin with, the old colonial powers of Great Britain and France have no standing on the world's arena going by their present capabilities and capacities to dictate or even request the rest of the world what to do! They are forcing themselves as world powers behind and in the shadows of their old ally, the USA. They need to step down or be made to step down from the altar which they have made their home for too long. The council needs some urgent expansion on grounds of realism.

Yes, the other three powers, the US, Russia and China are rightfully there in their slots. In fact the powers that can flex their economic or other muscles is no more Euro-centric and it has moved beyond the once dominating borders of Europe.

In reality, of course still staying with Europe the only nation that can contend for new slot of an expanded UN Security Council will be Germany which is undoubtedly the most powerful economic power in Europe.

Brazil, a huge country that is rapidly growing as an economic and military powerhouse and that can command respect in southern part of the Americas is a genuine contender. Africa gets narrowed down to another fast growing and developing nation of South Africa. It will be a dream come true for Nelson Mandela and the likes of him to see this happen.

Moving to Asia there are two very obvious contenders in India and Japan. Both deserve their slots as a developed nation and a developing nations that are already on the world stage in various capacities of the economic platform they share amongst others. Again military power of the contenders needs to be reckoned with, looking at the realities on the ground.

Of course opposition will be common place for the new contenders as other pretenders may object or demand their own candidature for the slot.

The new and expanded UN Security Council must look like this. The US, Russia, China, Germany, Brazil, India, Japan and South Africa taking the helm of the world affairs and representing the true masses of humanity which can look up to them for true justice in the affairs of the world. Not the haphazard resolutions that are being passed now and in the recent past that suits only a few powers that still want to dictate and rule the world on their own predetermined codes of conduct.

If the changes do take place, when is the large question, these invasions, attacks or occupation of foreign lands by the powerful few will stop and a new world order may come into focus and for the betterment of humanity at large.

Yes the change at the UN Security Council is very necessary and a change at the altar where important decisions are taken, can curb or put a complete halt to the imperialistic attitude of some, on a permanent basis.