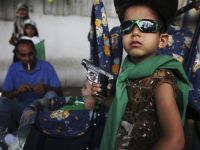 Pravda.Ru sources inside Libya have confirmed that the people of Tripoli are dancing in the streets in joy, celebrating a great victory, because NATO has ceased its bombing campaign. Sources in Libya state that negotiations are ongoing with France and meanwhile there has been a cessation of hostilities.

The beleaguered people of Libya have every reason to celebrate this situation, if it holds. The sources used in this article are reliable and are based inside Libya. They will not be named until they give their permission to do so, however, the information has been passed to Pravda.Ru for us to be the first to break the news, for which I thank my sources most sincerely.

While there exists a lot of conjecture as to what exactly is going on, we can confirm that in Tripoli people are dancing on the streets: "I can only tell you that the people in Libya are on the streets, singing and celebrating the peace".

The first point is that something tangible has happened; the second point is that talks are being held. "One of the Libyans tells me he has talked to somebody high in the government by the tribe net and he confirms this".

"I called to the non governmental fact finding committee in Tripoli and he says that no official confirmation exists but it looks like there is agreement in between France and Libya in conversations". *

Eye witnesses inside Libya have confirmed to the Pravda.Ru source that Libyan TV has stated that the forces have withdrawn from the flashpoints along the battle lines. France itself has denied holding direct talks with the Libyan Government but has admitted that messages are passed.

The French Defence Minister, Gerard Longuet, has claimed that the position of France now is that NATO will stop the campaign as soon as the Libyans start speaking to each other - something the Gaddafi government has been offering from the beginning and something which NATO, and the terrorists it protects, has refused.

Regarding Gaddafi himself, the position of Paris is now that he must "eventually leave power" - something which he had been preparing anyway, as he was devoting more and more time to building the African Union institutions.

It appears that NATO is frustrated with the lack of progress made by the terrorist forces, even though they are being openly supported, and now apparently by French troops on the ground in Western Libya, in open breach of the UNSC Resolution 1970. On Sunday the terrorists told the French forces they were in Al Assabha, but when Libyan TV went there to check, there was no sign of them and the residents confirmed they were not in the vicinity.

Meanwhile, BBC Arabic declares that the French Defence Minister has confirmed that the French will suspend their aggression in Libya, long before any talks take place. The BBC quotes a speech from Longuet made in Paris on Sunday where he stated that the opposition should not wait for the downfall of Gaddafi.

Time will tell what exactly is going on, but it is clear that by now the international community knows very well that the "opposition" is composed by corrupt people from the dregs of Libyan society, terrorists and Islamist fanatics and Benghazi separatists dying to get their hands on Libya's oil wealth, which Colonel Gaddafi had begun distributing among the African Union and the people of Libya.

This earned him few friends among certain elites in Libyan society, namely the racist element (black Libyans have been slaughtered in the streets in the East) and his positions against Sharia Law have earned him few friends among Islamist fanatics who wish to impose that law in Libya. Meanwhile his energy behind the African Union will have done little to endear him among the western bankers who have lost millions in interest payments as a result.

As I say, time will tell but it does seem there is some movement going on behind the scenes.

Author`s name Timothy Bancroft-Hinchey
*
18:01
Putin: Merkel confirmed Russia made the right decision
15:58
Merkel's remarks about Minsk Agreements were 'petty and disgusting' – Lukashenko
15:02
Viktor Bout says he did not come across Russophobia in US prisons
12:02
Massive fire burns OBI hypermarket at Mega Khimki Shopping Mall to the ground
16:48
US basketball player Brittney Griner exchanged for Russian entrepreneur Viktor Bout
16:31
Zelensky believes Ukraine conflict may end in 2023
20:46
The West is expecting, but not pressing Russia-Ukraine talks
18:27
Putin: The threat of the nuclear war is rising, why deny it
17:17
Ukraine modenises Soviet Tu-141 Strizh drones
15:24
Ukrainian combat drones capable of flying at speed of sound may strike Siberia
Polish writer shocked to find out Russians will not rise to topple Putin