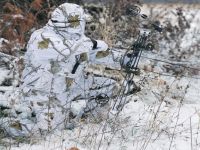 It is alleged that patients at a psychiatric hospital in the State of São Paulo, Brazil, froze to death recently. The question raised here is not the human tragedy itself but rather the preconceived ideas people have about countries. After all, isn't Brazil supposed to be hot?

The story is being investigated by the Brazilian Attorney General's office and the hospital in question, in the State of São Paulo, is being checked thoroughly after allegations that two patients froze to death inside a unit for persons with severe dementia. However, it is not this tragic story we are commenting on here, the more so because allegations are one thing and hard facts, another.

The question is, how many people would show surprise at the title? After all, Brazil is baking hot, isn't it? Isn't it the country of football and samba and bikini-clad beauties on the beach and body culture posing on a promenade?

This is the mirror of the type of culture upon which national stereotypes are built. Basically it is a culture of ignorance, sculpting carefully-crafted images of foreigners, labelling peoples using sweeping statements, descriptions and imagery, creating an identity of "them" which justifies the "us".

As a matter of fact, there are many Brazils inside Brazil and very few of those who travel to the country regularly could claim to "know Brazil", any more than one can "know Russia" or any other large country. In the south of Brazil, for instance, it snows in the Brazilian winter (the European summer); there are chalets; there are native German speakers, for whom Portuguese is the second language. They drink beer and eat wurst. For those who have travelled to the north-east, and imagine that the entire coastline is one huge extension of beach culture, drive inland from Fortaleza for 100 kilometres and you will find yourself in the hills of Guaramiranga, where the architecture is Swiss and where people wear Swiss-Austrian style clothes in the cool evenings.

So much for the stereotype. Instead of taking your sandals and shorts, why not go skiing in Santa Catarina?

Now, let us all admit that national stereotypes are wholly inaccurate. Sorry, but not all Portuguese men have moustaches, many Spanish "matrons" are slim, lots of Italian women dress badly and loads of Russians are tee-totallers. Let us also admit, then, that we know next to nothing until we go and see for ourselves.

Now let us delete the images with which our minds have been programmed by a biased and cynical machine called the mass media, since our date of birth. Let us forget those idiotic articles in which they claimed Romanian is not a Latin language and that Ceaucescu added the suffix "ul" to words to make them look more "Latin" (yes someone actually wrote that and yes it was actually printed in a "quality" British weekly) and forget the nonsensical stories about surly Russian women being rude in shops. In half a century of interacting with Russians, I have never met a surly one yet.

And now let us turn our attention to Libya. How many people actually know what is going on there? The story they are trying to sell is the "Gaddafi is a dictator" one. But anyone who actually bothers to read the Green Book, written by him, upon which the Jamahiriya is based, sees that Libya is in fact more democratic than most western countries. All western countries, in fact. And now we're speaking about it, how democratic is the EU? Did anyone ask Europeans if they wanted the Euro?

Does anyone ask you if you want your economy controlled, directly, by US ratings agencies?

Correct. So let us just entertain the notion that there is another side to the story in Libya. For a start, the Libyan Armed Forces are not fighting civilians, they are fighting heavily armed terrorists who started running amok on February 12 to 13, torching buildings and slaughtering black Libyans in the streets. Secondly, Muammar al-Qathafi's humanitarian record is in fact good - so good that he was to receive a UN prize for it in March 2011. Thirdly, NATO has ulterior motives for being in Libya - prime quality oil and massive water resources.

So let us inform ourselves about what is really going on in Libya and let us treat the hype and the lies the media thrusts down out throats with the derision they deserve. Muammar al-Qathafi is genuinely popular in Libya, that is why last Friday 1.7 million people took to the streets - 95% of the population of Tripoli and a third of the country's population. Would 20 million French march for Sarkozy? Would 20 million Britons march for Cameron? Would 100 million Americans march for Obama?