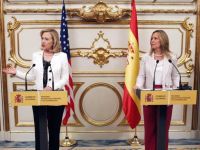 As the Emperor is very busy at home trying to avoid the financial collapse of the United States and emerge to end the wars in Afghanistan and Iraq, he decided to send Hillary Clinton to Spain for a review of the Zapatero government. In one day she met with Trinidad Jiménez, Minister of Foreign Affairs, with President Zapatero and the King.

At the end, the Iberian court was found following imperial orders with docility. After thanking them for the Spanish contribution to the NATO aggression in Afghanistan and Libya, Clinton said: "There is virtually no important global or military challenge that we are not working on together."

Even before that visit, Jimenez cleared all possible doubt by stating that "close cooperation between the U.S. and Spain will be visible in the political, economic and military spheres." According to the official statement from the Palacio de la Moncloa, in the review of international policy, Zapatero confirmed his support to Clinton for the U.S. government towards the Arab world, that is to say, "accompaniment" on the "Arab spring," collaboration with the aggression sine die against Libya and inconsistent adherence to the weak Obama proposal for Israeli-Palestinian peace talks.

On Afghanistan, given that the U.S. has begun a modest retreat, for which Spain will be most convenient to the interests of the empire as to the permanence of its 1,500 soldiers there. The reference in the official statement to Latin America is intentionally brief but very revealing in the background: the United States and Spain "share the vision" on the challenges they face.

Before such a flattering report, the U.S. Secretary of State went beyond the usual diplomatic courtesy. She dared to talk of economic reforms and severe antisocial measures adopted last year by the government of Zapatero. After praising them, she said she found it "politically difficult" but necessary.

"These changes take time and demand patience, but we must move forward with reforms ... all the way, regardless of the criticism they receive. A whole neoliberal program formulated by tanned politics (called "progressive" and "feminist" across the Atlantic), as if it were a question of ongoing duties imposed on an awkward but well-intentioned student. 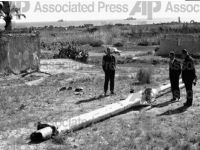 The only complaint by Spain during this visit was that the U.S. pay a portion of the cleanup of contaminated soil in Palomares (Almería) by two atomic bombs carried by U.S. military aircraft that collided in mid-flight to remove about 50,000 cubic meters of land poisoned with plutonium. Ten years ago I wrote about this collective tragedy silenced by the Franco regime in the same way that the democratic governments that succeeded him.

Remember that the nuclear accident took place in January ... of 1966. According to a leak in Wikileaks (El País, 10/12/2010), the then Foreign Minister, Miguel Angel Moratinos, wrote a letter to Mrs. Clinton urging her to fulfill her government's signed formal commitment in 1969 because, if otherwise, he feared that Spanish public opinion would turn against America to know the study on nuclear contamination (the study, incidentally, is still secret). According to this source, the Secretary of State did not even answer him. Now, yes, now the Spanish government has been satisfied with this pleasant response: "Obama takes very seriously the Spanish concern." And maybe wait for another 45 years!

There is no information on the content of the interview with the king. We only know the evasive official reference in her "have addressed the issues on the bilateral and multilateral set agenda,", or in other words, they spoke of what they had to speak. Much transparency, My!

Spain's participation in armed conflicts currently led at present by NATO (and especially Libya, civilian and military destruction finds more difficulties than expected) presumably has been the focus of these conversations, because we must not forget that, besides the head of state, the King constitutionally holds the supreme command of the Armed Forces. "I'm happy to see him again," Hillary Clinton exclaimed on having greeted him. Years ago, the king had also maintained a close friendship with the former Secretary of State, Condoleezza Rice, and President George W. Bush, both of sinister memory.

She also made use of this visit to Madrid to meet for just over half an hour with Mariano Rajoy at the Embassy of the United States. She accompanied the PP leader, Jorge Moragas, international relations coordinator of the party and close associate of anti-Cuban extremist groups in Miami. Moragas declared to EFE, the climate of the meeting was "cordial and warm." Rajoy noted that the reforms undertaken by the government must be "substantial" and expressed to Clinton the support of his party to the Zapatero government on the ongoing wars, because, he said, Spain will always be next to the interests of their allies.

In addition, he had time to express "the need" for al-Qaddafi to abandon "his Numantine pretensions." I do not know how you would translate into English this reference to Numancia. It was my understanding that the city so far has resisted all the way to defend the freedom of their people before the siege of the troops from Rome and that this had been an example of heroism for Spanish patriots of all times. The theme of resisting empire and to prefer death to slavery seems to sound bad to these modern right wingers.

Strangely, the issue that she spent more time with was not a bilateral problem (for example, Palomares) but ... Cuba. And the old ghosts of the PP reappear this way. Clinton and Rajoy shamelessly treated the political future of the island as they wished for a return to capitalism made in USA, what is called euphemistically "the transition to democracy."

In the same interventionist line, Rajoy reiterated to the representative of the empire his "entire priority" to the so-called "Common Position of the European Union," a discriminatory policy against Cuba and its sovereignty that prevents the normalization of relations with Europe. It was introduced on the unpresentable initiative of the third man from the Azores, José María Aznar.

As a grand finale of the interview, Rajoy gave Clinton a Extremaduran, a boned Iberian ham, vacuum packed. The whole obliging, Celtiberian detail, although not Nurmantine and healthy, was not very appropriate on this rainy day, to ingratiate himself with the representative of the empire.