Strauss-Kahn caught between jail and presidency 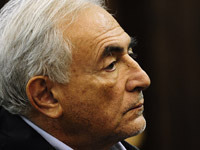 The case of the former head of the International Monetary Fund (IMF) Dominique Strauss-Kahn, who is accused of raping a maid, is virtually falling apart. It is not ruled out that he will not only regain his good name, but may even fight for the French presidency.

Everything indicates that the case of the prominent international official and likely presidential candidate of France is at risk of a complete collapse. All Hollywood special effects when incorruptible American police brings an accused official into a courtroom, and a strict judge is ready to sentence him for 74 years, would look ridiculous. The reputation of the American Themis will inevitably be threatened.

On July 1, another hearing in the case of Strauss-Kahn took place in New York. The results were sensational. The former head of the IMF was released on bail of six million dollars, and this money will be returned to him. He cannot leave the US until the next hearing planned for July 18. However, he is free to travel within the country.

Why is the case falling apart? By an amazing coincidence, this was described in detail by The New York Times. Only six weeks ago this paper more than any other openly condemned Strauss-Kahn, admiring the probity of the American justice, arguing the merits of the American political morality over the European. In fact, it turned out to be quite the opposite.

The newspaper reluctantly admitted that a forensic examination clearly showed that a sexual relationship between Strauss-Kahn and a hotel employee did take place. Yet, now the prosecution does not believe much of what the maid told them about the circumstances of the case. Since her first statements made on May 14, the plaintiff repeatedly lied, as reported by one of law enforcement officers.

The 32-year-old native of Guinea wanted to look as an "innocent victim", but turned out to be a lady with a tarnished reputation. After her contact with Strauss-Kahn she called a person serving a term in jail for drug trafficking and money laundering. She discussed the benefits to be derived from Strauss-Kahn. The unnamed person at the other end of the phone line made a deposit to the bank account of the maid at the amount of $100 thousand.

The New York Times drew attention to the fact that when the maid had requested asylum in the U.S., she concealed information about the rape she was subject to back home. There were other details of intimate nature that, contrary to the American standards for asylum, were not disclosed. The portrait of an innocent victim somehow did not add up.

Here is the room for some speculation as to who wanted to do this to Strauss-Kahn. The U.S. definitely had a grudge against the now former head of the IMF. He was repeatedly critical of the fact that the culprit of the current global crisis was the liberal model proposed by the Americans to the world. Strauss-Kahn criticized the scheme with the US dollar as the world's sole reserve currency. If we assume that this theory is correct, the U.S. reached its goal. The objectionable politician no longer heads the IMF.

However, if the goal was to completely eliminate Strauss-Kahn from the politics, then his opponents were mistaken. The French newspaper Le Figaro did not rule out that the former head of the IMF may in the next year compete for the presidency.

What if there is another big change to the French election scenario? After the incident last night, Dominique Strauss-Kahn's most ardent supporters believe that he may get back into the race, if the charges against him are dropped. In France the Socialists are confident that such an unexpected twist could change the situation inside the Socialist Party in the primaries before 2012 presidential elections, the publication reported.

According to the polls, this turn of events is welcomed by many French. Forty-nine percent of the country would like to see Strauss-Kahn back in politics (among the supporters of the Socialists there are 60 percent of those). Fifty-one percent of voters call for the Socialist Party to wait for their candidate nomination, and to postpone the procedure from July 13 to a later date.

In turn, the French newspaper Libération quoted the words of Strauss-Kahn. They imply that the former head of the IMF was ready to be backstabbed. He used only the encoded telephone out of fear that it will be tapped by the Interior Minister of France Claude Gean. The politician also said that there will be a woman accusing him of rape - somewhere in the parking lot in front of a hotel or in a room of Sofitel. If this is true, Strauss-Kahn, can call himself a prophet.

For its part, the Italian newspaper La Stampa linked the scandal with the maid and the intention of the politician to fight for the French presidency. "I am not a supporter of conspiracy theories, but I remember very well what he was promised a nuclear explosion when he announced his candidacy (in the presidential election in France - Ed.)", - the newspaper quoted of one of the fellow party members of Strauss-Kahn.

At the same time, the publication does not believe that Strauss-Kahn would be able to become president, even if all charges against him are dropped. "The French would not elect a president who had sex with a hotel maid," Italian journalists believe. The moral of the story, according to La Stampa, is the fact that poison in politics can be used against anyone, anytime, anywhere.

It seems that the "Strauss-Kahn's case" will long remain one of the main topics of the world media. It is unlikely that the discussion will be over even if the prosecution collapses. Who was behind the conspiracy? Who benefited from it? Will the disgraced politician become the president? The intrigue will not die. Strauss-Kahn can claim the title of the politician of the year on a global scale. And, certainly, the title of the "victim of the year."